Dedham Vale is an area of ​​outstanding natural beauty full of single-lane roads, cast-iron Victorian road signs and crooked Tudor buildings. Among them is the gourmet restaurant Angel Inn in Stoke-by-Nayland. Independently owned by Suffolk Country Inns, the former 16th century pitstop and travellers’ pub has undergone a two-year renovation. As well as renovating the existing restaurant and six bedrooms, the owners bought and restored a stable next door, removing the concrete walls, exposing the original beams and adding five new bedrooms.

Chef Ruben Aguilar Bel’s sumptuous creations are the draw – when a tasting menu’s curtain raiser is this crisp and springy, you know you’re in good hands. The following nine courses are a whirlwind of Spanish-Anglo flair: Dedham Vale venison tartare with currants and parmesan; a gamey and crispy hare risotto; and the Iberian pork “secreto” (so called because Spanish butchers keep the cut for themselves) cooked on a charcoal grill. At the end, a wonderful surprise: a plate of petit fours, with black olive chocolate ganache – the most brilliantly confusing umami yet sweet confectionery I’ve eaten.

The small but cozy bar, just behind the fireplace, is perfect for an old-fashioned pre-dinner (£11) while choosing your wines. While a flight with wine pairing is available (£55 pp), the lure of sommelier Valerio Vallani’s selections made us opt for a bottle of Fitou 2020. Service from general manager Sean and Georgia, at the ‘front of the house, is relaxed but immaculate.

It was a brief, wine-hampered swing in a courtyard and upstairs in Speyer, our bedroom in the annex. Wobbly beams and windows add charm, but there’s also a huge freestanding bathtub behind a glass privacy panel that freezes at the touch of a button, USB outlets and, unusually for a building of this age, air-source underfloor heating in the bathroom.

A table-side full English breakfast is served in the Well Room, named after its unexpected feature – a 100-foot-deep well – including Suffolk sausage and thick black pudding. 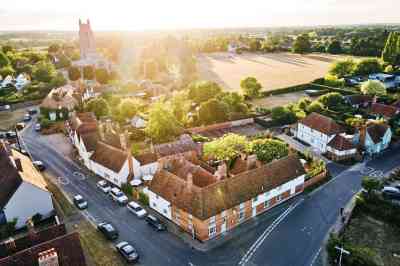 This is Constable Country – the 18th century landscape artist was born on the road in East Bergholt – and nine courses mean a walk is a must. A circular route from the Angel passes Stoke-by-Nayland Church and the Elizabethan houses of the village, while marked paths lead to the ruins of Tendring Hall. A ten-minute drive across the border into Essex is the village of Dedham, with its cozy pub, The Sun. From there it’s a 40 minute meander to the hamlet of Flatford, where Constable painted The Hay Wain in 1821.

It’s pretty rare to stay at a city landmark, but if you’re going to Atlanta, you can make it to one of its true landmarks when you book a room at the Clermont Motor Hotel. It’s immediately noticeable from the road thanks to its iconic radio tower — with the hotel’s name in big neon […]

Dubrovnik is known as the “Pearl of the Adriatic” – and it’s easy to see why. Located on the beautiful Dalmatian coast of Croatia, the city has become a tourist hotspot in recent years thanks to its picturesque old town, medieval walls and turquoise waters. Used as the main filming location for ‘King’s Landing’ in […]

Think about the dream vacation that the pandemic denied you this summer. Think of this long golden beach and the shimmering and shimmering surf, just minutes from your elegant hotel and its extremely chic restaurant. Good news, you don’t have to dream about it. It’s up to you to take it, if in a rather […]