Taste, a fast-growing app for movie and TV recommendations, has launched its new website – offering its services directly from web browsers.

There are websites such as IMDb or Rotten Tomatoes that provide insight into what the film looks like based on reviews provided by professional critics and other audiences. However, the rapidly growing community behind Taste believes that a better assessment of “should you watch this show” is possible when reviewers and reviewers share your personal tastes and preferences. Where streaming platforms use algorithms to generate recommendations, the New York startup relies on organic reviews created by users to generate a list that matches a particular preference. 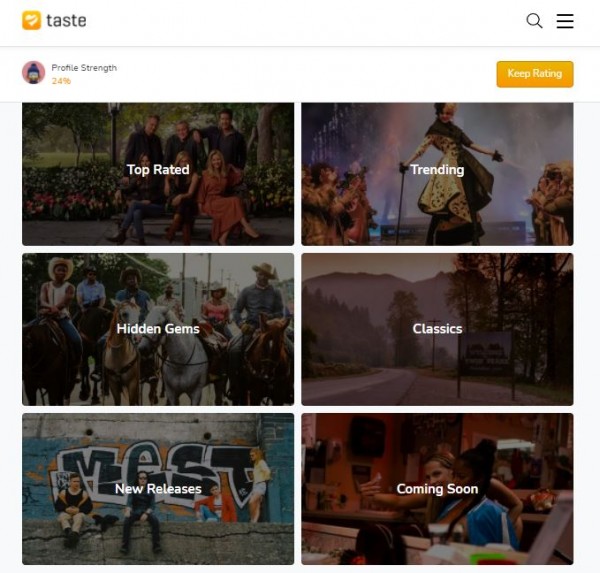 The New York-based startup already has hundreds of thousands of users taking advantage of recommendations from the Taste app, available on Apple App Store for iOS devices and Google Play Store for Android users. Now it is expanding its reach, bringing benefits to more users by launching the new Taste websiteallowing moviegoers to join the community directly from their web browser.

“We believe the people most qualified to help you decide what to watch are those who like the same things you do,” says John Lin, founder of Taste. “Our app has connected like-minded people, helping them uncover hidden gems that would otherwise have been missed.”

How taste connects you to like-minded viewers

Both website version and app version, Taste offers visitors to create an account or simply to take the test. After a few questions like name and gender, a series of movie posters are shown. Taste asks users to rate a series of films – with selections ranging from the 1980 parody “Airplane!” to 2001’s cult classic “Donnie Darko” – on a scale from Awful to Amazing. There are also options such as “Not interested” and “Not seen”. After rating the movies, the profile creator retrieves “ratings and reviews from like-minded users” and comes back with a profile for your account.

On the platform, users are connected to other users with roughly similar interests regarding movie and TV show preferences, and their reviews are highlighted above others. This allows users to sort other reviews that are relevant and relevant to them by giving them the choice between two sets of reviews: “Users like you” and “All users”.

Additionally, Taste offers lists such as “Top Rated” for the best movies among “Users Like You” as well as “Hidden Gems”, for a specially curated list that suits your personal preferences.

Next time you’re stuck scrolling through your Apple TV, or lost in the sea of ​​content on Netflix or Amazon Prime Video, drop by Taste and let “Users Like You” offer suggestions.

Founded in New York in 2018 by John Lin and Justin Messina, Taste is the revolutionary new platform for movie and TV reviews that leverages information available on traditional review platforms like IMDB and Rotten Tomatoes. What makes it different from other platforms is that it provides a human experience by connecting like-minded people and popping their reviews to guide viewers with like-minded people.

Additionally, the community behind the new platform was created to promote objective online reviews by creating a space that is gender neutral and free from common biases such as gender bias and commercial manipulation. Its community currently has over half a million members, generating over a hundred thousand ratings and reviews every day.

ⓒ 2021 TECHTIMES.com All rights reserved. Do not reproduce without permission.

Who is behind this site? A checklist.

By Priyanjana Bengani (@acookiecrumbles) and Jon Keegan (@jonkeegan) IRE NICAR Conference – March 4, 2022 Slides: English | Russian The towing center would like to thank Dr Svetlana Borodina and the Harriman Institute for translating this presentation into Russian. What is that? This checklist is intended to be used as a reporting tool to help […]

Minnesota Frontline Workers Compensation Law What You Need to Know

As expected, the Minnesota Department of Labor and Industry recently provided an update regarding the new frontline worker compensation law by distributing a fact sheet and a set of answers to frequently asked questions (FAQ). Specifically, the state anticipates that the application period during which eligible workers can apply for frontline worker pay will run […]