Take a beautiful six-story Grade II listed warehouse in the city center, convert the upper ground floor into a huge lobby, restaurant, bar and coworking space, then add 137 hotel rooms. Lo and behold, the Alan Manchester has landed – an independent hub for visitors and locals alike.

The Alan – so named because it looks like an unpretentious companion – is welcoming, modern and stylish. The open-plan upper ground floor gives the impression of an indoor plaza. They’ve removed a reception desk, using the space for DJ decks with Bose speakers, so look for a roving receptionist with an iPad when checking in. It is intended to be a creative place – a large ‘maker’s table’ in the lobby will be used for watercolor, macrame, creative writing and DJing workshops.

One of the common areas of the hotel

Upstairs, there are four categories of rooms, from standard to suite. All are quirky, with bare plaster walls, exposed overhead ducts painted celadon green (the same color as the exterior hallways), gorgeous emperor beds, and pink sinks in the bathrooms. The seven Alan suites are even more eccentric; the double shower and gold island vanity sits in the open plan bedroom with you. Most of the suites are in the curved corners of the building, with plenty of natural light as well.

The kitchen serves light snacks and you can eat in the restaurant, bar or in the lobby. Everything comes in individual bowls, so the experience is more about a bite to eat than dinner. Small plates such as halibut ceviche and truffle mac and cheese were simple, while meat dishes included a pleasantly pink, locally sourced Barnsley lamb chop. 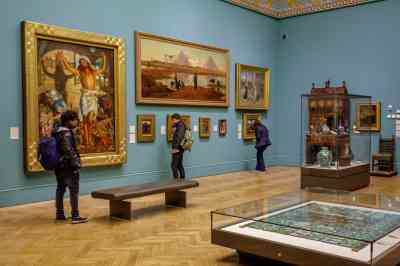 The city center is easily accessible on foot, and the Alan is right in the heart of it, directly opposite the Manchester Art Gallery, with its Lowrys room (free entry). A two-hour guided walk with Gareth Smith of Si Manchester is also free, providing a great introduction to the birthplace of the Industrial Revolution. This month marks the 40th anniversary of the opening of the Hacienda nightclub; stroll along the Rochdale Canal towpath, where the history of this infamous place is etched into the steel walls of the apartments that now stand on the site.

Laura Ivill was a guest at the Alan, which has double rooms from £99; small plates from £6. Accessible; restaurant

After almost two years of Zoom, WFH then no (then WFH again) and complete uncertainty, the idea of ​​traveling overseas felt like a distant dream. But then I flew to Saint Lucia. I had the opportunity to stay at the Harbor Club St. Lucia which is part of the Curio Collection by Hilton. The elegant […]

Behind the Scenes of Hotel Review Sites: Four Things Hotels Can Do to Improve Their Ratings

Before booking their next stay, today’s traveler simply refers to their choice of hotel review sites to browse through a handful of reviews and photos from actual travelers. Travelers of all ages now routinely rely on the rapidly evolving user-generated content (UGC) model as one of the primary drivers of their peer-driven decision-making process. With […]

Hotel inspector revisits a gothic mansion where The Rocky Horror Picture Show was filmed and is impressed with the revamp of a former ‘corporate monstrosity’ The inspector stayed in a £325 room at Oakley Court, near Windsor, which had a view of the Thames After a rebranding, the hotel has renovated more than half of […]