The magic of a romantic movie is that the whole world receives a rose-tinted refreshment – anything and anyone’s life can be renewed and reinvented.

It’s the dreamy feeling we get when we step into Firangi Superstar, the brand new modern Indian concept from The Dandy Collection along Craig Road.

Calling itself a “love letter from a stranger to India”, it’s a space where classic cuisine becomes whimsical, colonial Indian glitter meets Wes Anderson technicolor, and even a firangi (alias foreign) can rewrite the script.

Like a love letter, Firangi Superstar exudes old world romance. The 93-seat space is divided into four themed areas, each as wonderfully immersive as a movie set.

Enter the Officier’s Club, a refined lounge of dark reds and wood paneling. With its walls lined with antique rifles and photographs of turbaned officers, it’s a lavish place to sip a gin and tonic.

Or climb aboard the Old Railway Room, a private ‘car’ framed by train windows and antique suitcase lockers – it’s a painting straight out of a vintage murder mystery.

For a taste of aristocratic style, slip into one of the sumptuous benches at Elephant Palace. Inspired by the Blue Room of the Udaipur City Palace, this section is all in turquoise tones and Rajput-style arcades, guarded by a majestic couple of male elephants.

Meanwhile, tucked away in the back is the Jungle Lodge – a lush Indian wilderness lurking around with big cat murals.

‘Firangi‘is a somewhat hostile epithet for’ foreigner ‘in India, especially a British or white person – somewhat reminiscent of’ from Singapore ‘angmoh‘.

Chef Thiru Gunasakaran (formerly of Spago by Wolfgang Puck) considers himself a firangi – as a third generation Malaysian of South Indian origin, he grew up with Indian cuisine while being trained in Franco-Western cuisine.

In the hands of his firangi, however, the traditional flavors translate into something fun and fresh.

Take This Is Not Aloo Gobi ($ 16), a playful dish you certainly can’t confuse with the humble potato and cauliflower classic. There is a bed of very chewy cauliflower cuckoo fried in ghee, with a sweet and sour finish with mustard seeds, raisins and a spice compote.

Its crowning glory, however, is not the charred tandoor florets crammed on top, but rather the addicting potato cubes next to it. Thinly sliced ​​potatoes are brushed with ghee, then compressed and fried in crispy, buttered cubes.

If you’re a fan of Dandy Collection’s Neon Pigeon concept and its edamame hummus, you’ll want to try Beirut Bhatura ($ 12). 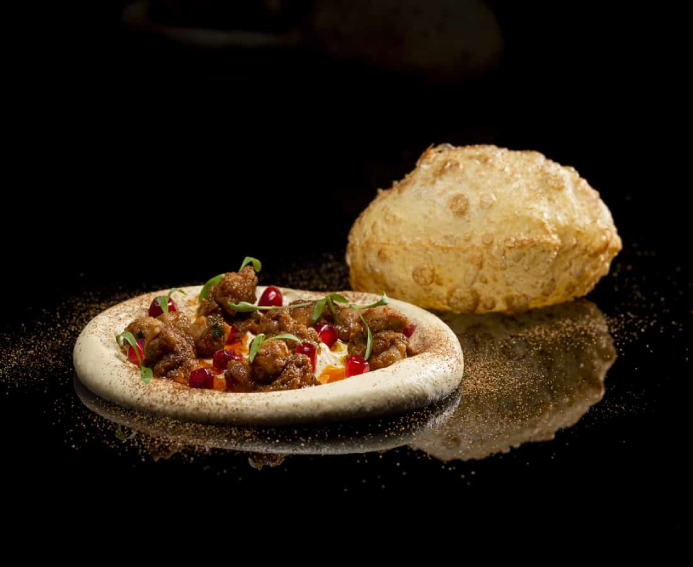 This fresh, silky celeriac hummus is spiced with chickpea masala and pomegranate seeds – perfect for blotting up with fluffy bhatura (fried bread).

Another small plate, Sothi Fresh ($ 22), is a refreshing marriage of snapper ceviche and sothi – a light coconut milk curry that doesn’t overpower the delicate fishiness.

ALSO READ: 10 New Restaurants To Dine In Now That Restrictions Are Lifted 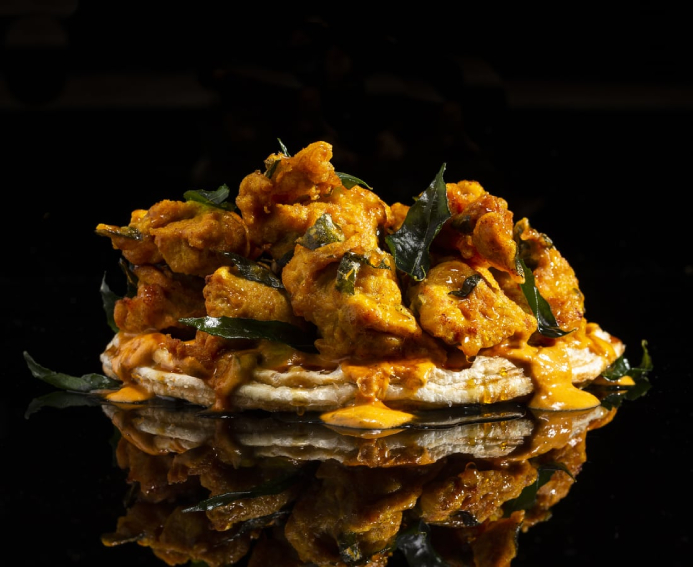 A drizzle of jaggery syrup replaces the usual maple syrup, while the butter chicken sauce on the side takes the Indian soul food factor up a notch.

Now we appreciate that his designs aren’t just playful – each offers an intricate waltz of the familiar and the fantastic. Perhaps no dish sums it up better than Salvador Thali ($ 41), which turns the humble pumpkin into avant-garde art. 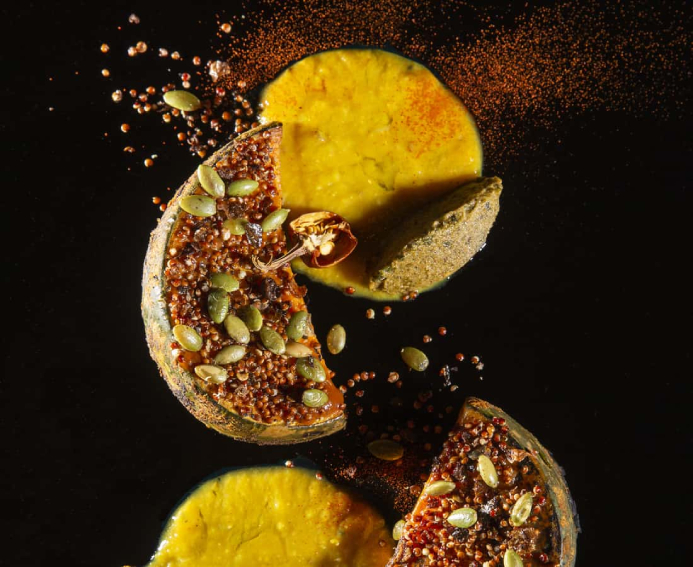 Bringing together the tangy, savory and spicy flavors of a thali, this large plate features pumpkin dipped in a sambhar marinade and charred in the tandoor to a smoky sweetness.

The pumpkin slices are then topped with a mixture of lime pickles, salted fried chili flakes, quinoa and pumpkin seeds, then served with dumplings of mint and coconut paste. The result is as colorful as it looks.

There are also large, more traditional dishes like tandoori lamb on the menu. Dubbed Indian Saddle ($ 19 for 100g), this lamb porterhouse is marinated in spicy yogurt and cooked in the tandoor until tender.

A herbaceous touch of chermoula in no way hides the unvarnished cheerfulness of the meat. Best served with a fragrant bowl of anise and ghee rice ($ 6).

Matching the grub is an intriguing range of Indian riffs on cocktail classics. Laced with chai masala, the Chai Ramos Fizz ($ 22) is an instant hit for us with its cinnamon warmth and meringue sweetness. 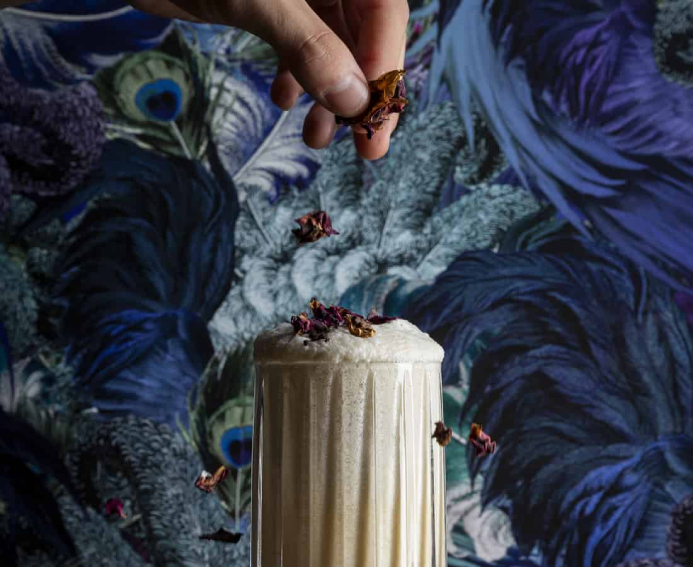 Expect a range of gin-tonics featuring spirits from India and around the world – it’s fitting that they designed the menu to mimic a set of vintage train tickets. Get on board.

ALSO READ: The weekly food: 5 things to eat and drink in Singapore this week

This article first appeared in Nomads of the city.

The jerk chicken platter at Bonfire restaurant in Biloxi. Julien brunt Sun Herald Special A unique restaurant opened on rue Caillavet some time ago, but the COVID pandemic has forced them to only offer take-out for months. Then the business suffered another blow in October 2020 when Hurricane Zeta caused heavy damage to the building, […]

Malcolm Yards Market Offers Diversity, Quality and FunPhoto by Kevin Kramer I am a dining room skeptic. Yes, I went to Reading Terminal Market in Philadelphia and loved DiNic’s Broccoli Rabe Sandwich. Grand Central in Los Angeles is cool, as is Chelsea Market in New York, but Minnesota’s efforts have left me on the edge. […]

I had breakfast at Bach and loved it so much I went back for lunch the same day. And I must say that if they had been open for dinner, I would have been very happy to return a third time to this wonderful place to end a day of taste pleasure. The Bach is […]