What kind of crazy people would choose to open a new bar and restaurant at a time like this? With the lockouts and restrictions, cleaning regimes, masks and seated drinking rules, as well as guests still unable to grasp the concept of booking in advance, you’ll either need to be a little nutty or have a very firm mastery of the complicated nuances of hospitality.

Walk-ins were once part of the standard clientele, but now you’ll have to wait in the cold for another group of rushed diners to leave their tables. And then you will always have to be ready because it is sufficiently disinfected before you take your prized seats.

An unthinkable nightmare for some. But for others, a carefully considered challenge worth accepting.

I stumbled upon Bar Lune during the opening week last May and very quickly discovered that its owners – Sam Worrall-Thompson (former executive chef of Fine and Fettle and Community) and partners Toby Porter (ex-d’Arenberg), Josh De Haas (Chopping Board Catering), Tony Bales (ex-Salon Lune Rose) and Brett Hicks-Maitland (Community) – seemed to have everything under control.

The space has a chic layout with a large terrazzo bar, comfy window seats, high and low tables, and a wall that displays its very well-curated collection of high-end (but still well-priced) wines. The mood was set with dim lighting and soft, upbeat tunes. Enthusiastic staff buzzed between drinkers and diners who worked their way equally enthusiastically through a short but satisfying menu of snacks, dishes, and drinks.

Moon Bar: A suburban bar with all the finery of city-style places. Photo: Jon Wah

It was obvious that by week one, the team behind Lune knew exactly what they wanted to offer their audience. A suburban bar maybe, but with all the finery of an urban style place and without a whisper of attitude. That night we nibbled on a silky duck parfait and white anchovy toast, were introduced to barramundi soldiers and wood-roasted pee, and washed it all down with recommended glasses of this and that from the wall of wine. It was truly an unexpected treat.

Stalled in the same bar a few months later, we are treated with the same familiar feeling. The menu has changed a bit, but luckily they’ve kept some of those introductory snacks.

Moon’s katsu is proof that the Wonder White sandwich trend is as strong as ever – a sort of wagyu patty that is breaded, deep-fried and topped with a bespoke wombok and onion coleslaw salad. A “bulldog” sauce lends a smoky flavor and makes us sing the praises of this Japanese-inspired little bite.

And then the kingfisher sashimi is spread out on a plate among strips of pickled cucumber and kohlrabi, each offering its own slightly bitter pickled flavor. The combined efforts of crème fraîche and shiso oil combined between the main ingredients offer a very balanced vegetal and creamy taste.

Then, we revisit these delicate white anchovies, each placed on a small and spicy salad with eggs “gribiche”. These are drizzled with a herbaceous sauce that adds complexity and again balances the creaminess of the egg with the flavor of salted marinated fish.

Of course, the parfait makes another appearance – these are the signature snacks on the menu. Each spoonful of whipped duck liver is centered on a quarter square of toast that has been charred over a fire, its center sculpted to accommodate a tiny quenelle of chopped jam made from flavored dates. My advice is to order a lot more of these pieces than you think you need and then order again. 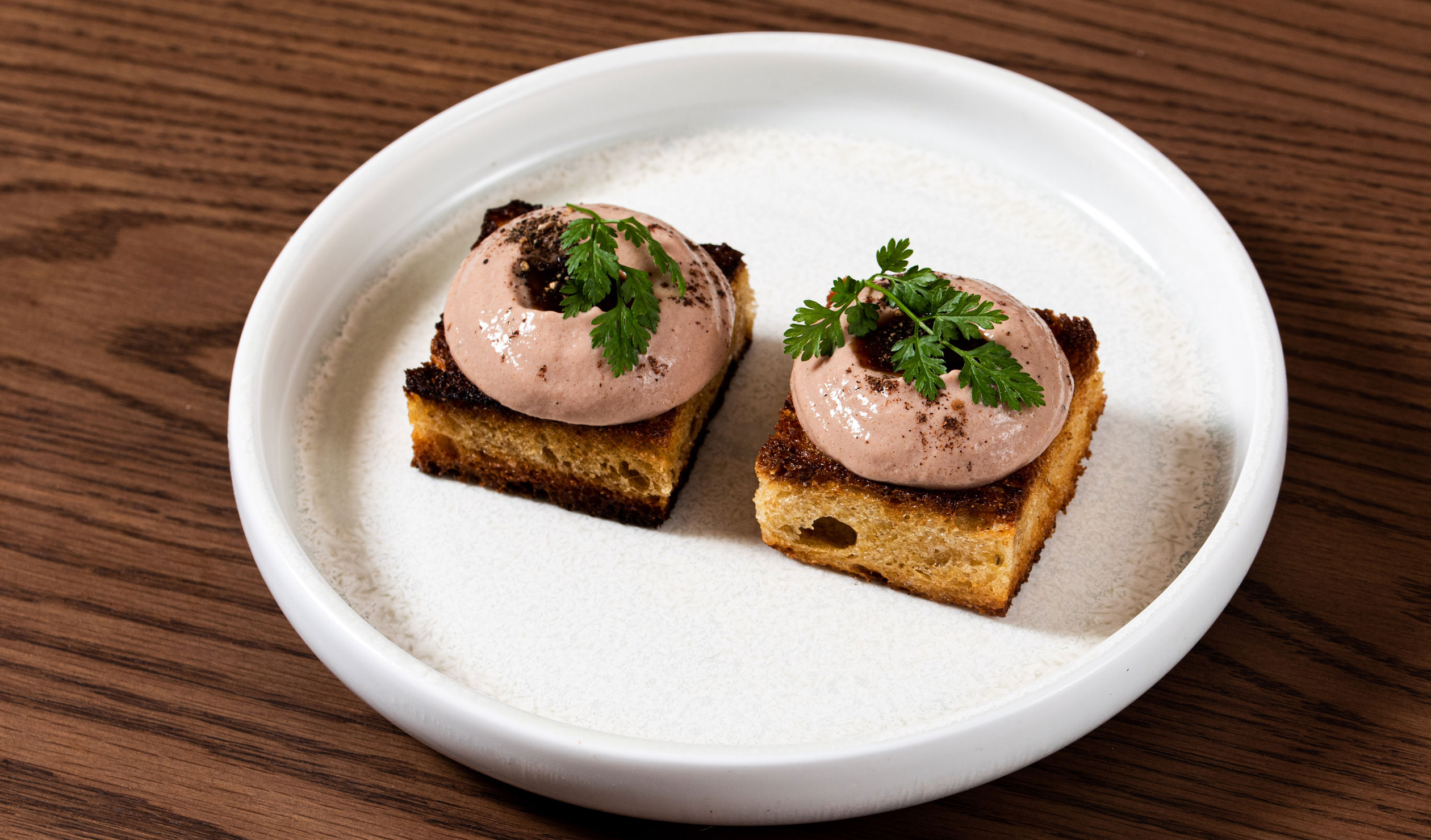 The last of the snacks is a silky taramasalata which is incredibly light and white. Another hollowed-out center provides a pool for salmon roe swimming in flavored olive oil, and the fries served alongside make the perfect salvage utensil. And you will; until the very last drop of this simple yet delicious dip.

Moon’s biggest dishes are meant to be shared, with good variety between meals that highlight seafood, meatier protein, and vegetable-centric heroes. The roast duck has been removed from the thigh bone and combined with hazelnuts and pancetta in a smoky sauce that coats thick chunks of freshly made pappardelle. A dash of pangrattato crumbs adds extra texture and crunch to this hearty pasta dish.

Expect a bit of spice and reasonable heat from a chili sambal, liberally applied underneath and over a full section of sliced ​​calamari that clearly spent more time marinating in some sort of delicious barbecue sauce than be licked by flames of charcoal in its preparation. The result is a perfectly cooked and very well balanced dish where the seafood shines, despite the strong flavors surrounding it.

The Moon wine list is another highlight to mention. It is designed as a journey of discovery, whether to eat or not – with a strong local presence, but also a strong influence from interstate regions and further afield.

Our first snacks were associated with a white blend of Barossa made in a typical French style, the John Duval Plexus with its pale but vibrant blend of Marsanne, Roussane and Viognier. To tone down the heat from the sambal squid, we sipped Chardonnay from Tolpuddle, a Tasmanian grower known for producing the best of this white grape and also making jaw-dropping Pinot Noir. A little later, instead of dessert – a McLaren Vale Shiraz from Ox Hardy. 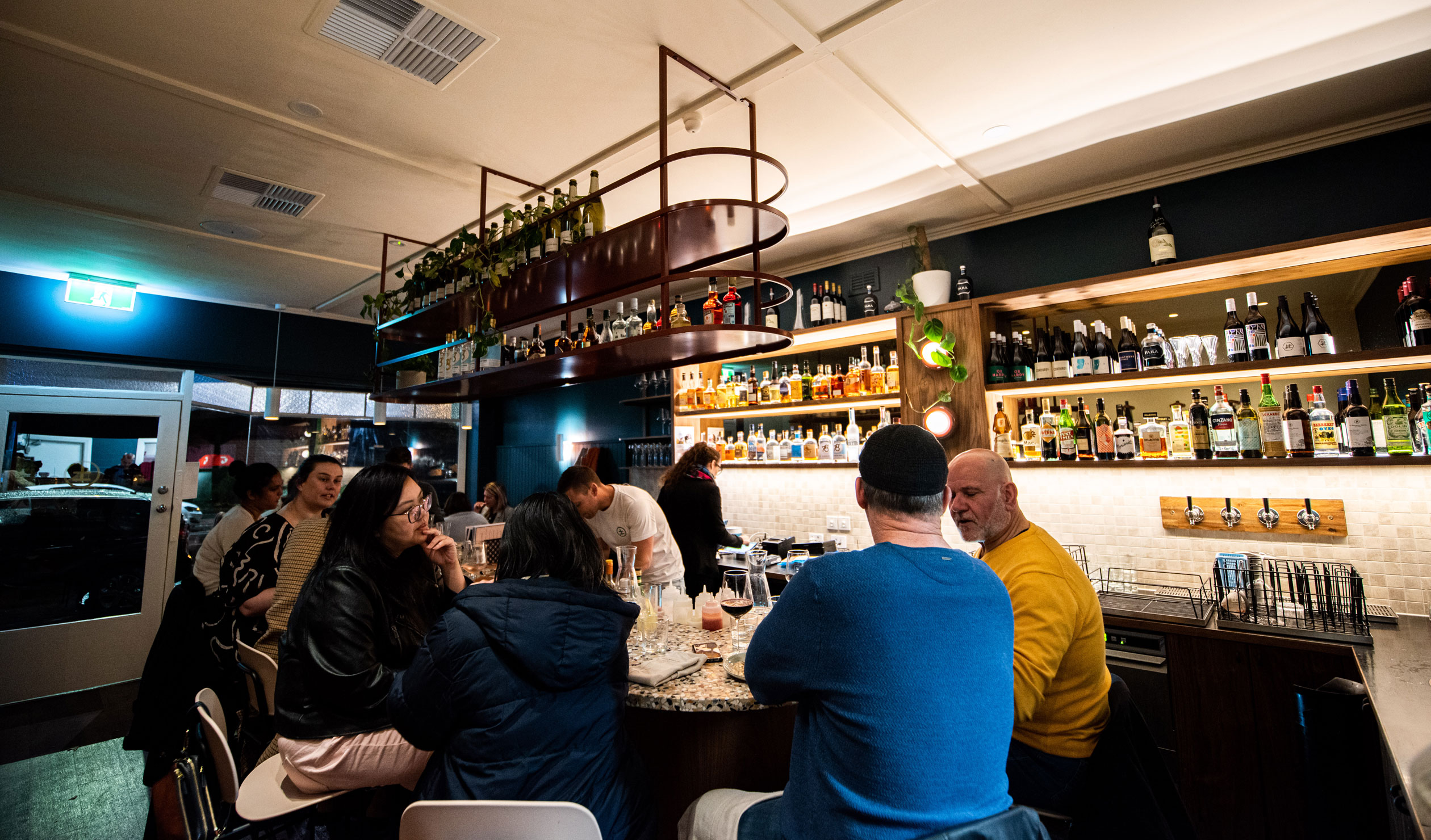 The Lune bar has a chic layout and soft lighting to set the mood. Photo: Jon Wah

It would be remiss of me not to mention a few other goodies offered by the Moon team that come in the form of their special and wholesome Sunday events, where you will see special menus of food and drink like Louis Roederer accompanied. of lobster. presented in various forms, or crab dishes accompanied by finest Chablis castings and a DJ soundtrack curated to match.

And so whether you’re looking to Moon for a quick weekday snack, a late Friday dinner, or a long Sunday session, my advice is to plan ahead, make your reservation early, and help keep those Moon alive. -atics to serve their sensational. eat, beat and spoil.

InReview is a revolutionary publication providing local and professional coverage of the arts in South Australia. Your tax-deductible donation will go directly to support this independent, not-for-profit journalism and art critic.

This article is supported by the Judith Neilson Institute for Journalism and Ideas.

Restaurant Review: Souter’s Inn, 47 Main Road, Kirkoswald, Ayrshire Schedule An icon of a desktop calendar. Cancel An icon of a circle with a diagonal line across it. Caret A right-pointing solid arrow icon. E-mail An icon of a paper envelope. Facebook An icon of Facebook’s “f” mark. Google An icon of Google’s “G” mark. […]

The Bird in the Hand, Knowl Hill: Read the restaurant review

That’s what my guests and I found ourselves saying after every first bite of every dish we tried at The Bird in Hand. And, to be frank, every bite that followed. It wasn’t until we couldn’t eat from the revamped menu at Knowl Hill pub and restaurant that we stopped exclaiming. Taken over by Butcombe […]

Photo by Jason DeRusha The gourmets of the western suburbs cried the tears of Croque Monsieur when they learned that Gavin Kaysen was closing Bellecour in Wayzata. But when a famous chef’s door closes in Wayzata, another opens. Talented and prolific chef Daniel Del Prado brings pizza, handmade pasta and gloriously roasted vegetables to the […]