40 North at Alphabet City has the ambience of an old-fashioned Greenwich Village, North Beach or London’s Shoreditch arts cafe. This is the kind of place where a simple impromptu dinner turns into a festive occasion – because you and your friends decide on another turn and dessert is what your Wednesday night needs – and that’s a new destination for those of us who love to sit at the bar with a great novel as a companion for a light dinner.

Start your evening with something energizing, like a spicy green salad – a layered and balanced plate of tangy leaves like mustard and mizuna, pickled onions, hazelnuts, pepitas and sheep’s milk feta. . For an opening snack, look for something seasonal like late-July chanterelle toast. This dish, a slice of crusty bread painted with a black mortar of black trumpet mushroom butter, chanterelles bursting with the flavor of a summer forest floor cascading over and in front, was a celebration of the peak of the season. mushrooms in Pennsylvania. Serve your first courses with a sweet and sour fruit shrub garnished with gin (or don’t add gin; the shrub and soda are fabulous on their own too) or a refreshing and refreshing martini sweetened with a splash of gin water. apricot life. 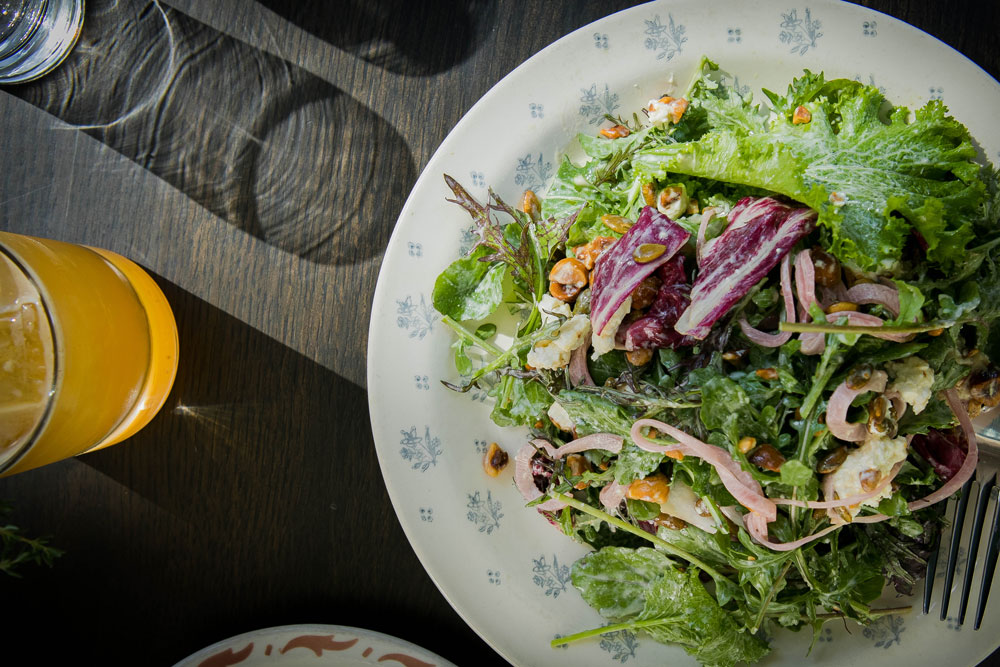 Executive Chef Bethany Zozula and room managers Josh Bondi (who has since left 40 North for another role) and Sam Suter (also the restaurant’s beverage manager) have developed an experience that, from menu to music selection, apparently merges relaxation and energizing energies, sophisticated and relaxed in a unique experience of well-being. All three (and much of the staff) are alumni of the hospitality program at the old Ace Hotel, where Zozula was executive chef at the hotel’s restaurant, Whitfield. The inheritance shows; service at 40 North strikes a difficult balance between pleasant and formal.

40 North occupies about a third of the ground floor of Alphabet city, which is operated by City of asylum, a non-profit arts organization that hosts writers exiled from their country of origin because of their artistic expression. The restaurant shares space with a terrific bookstore – unfortunately for those of us who like to browse and shop, its opening hours don’t extend to serving dinner – and a small playhouse.

Every time I have visited 40 North I have loved the dining area even more. It had a lot to do with the fact that the management moved the seats deeper and deeper into the performance area (still inactive on my visits) in the center of the building. This broke the fourth wall and fully embraced the site as a whole, which the previous two restaurants that occupied the facility failed to do. Be sure to check the City of Asylum schedule before making your reservation, as occasional shows have since returned and could impact your dining experience.

Zozula and the restaurant staff work with City of Asylum and treat the (typically) two-hour performance window as a special event that includes increasing the menu and even adding a small tasting menu (optional); no shaken cocktails will be served at the bar either. Anyone who makes a reservation on those evenings will be contacted to make sure guests know what’s going on. 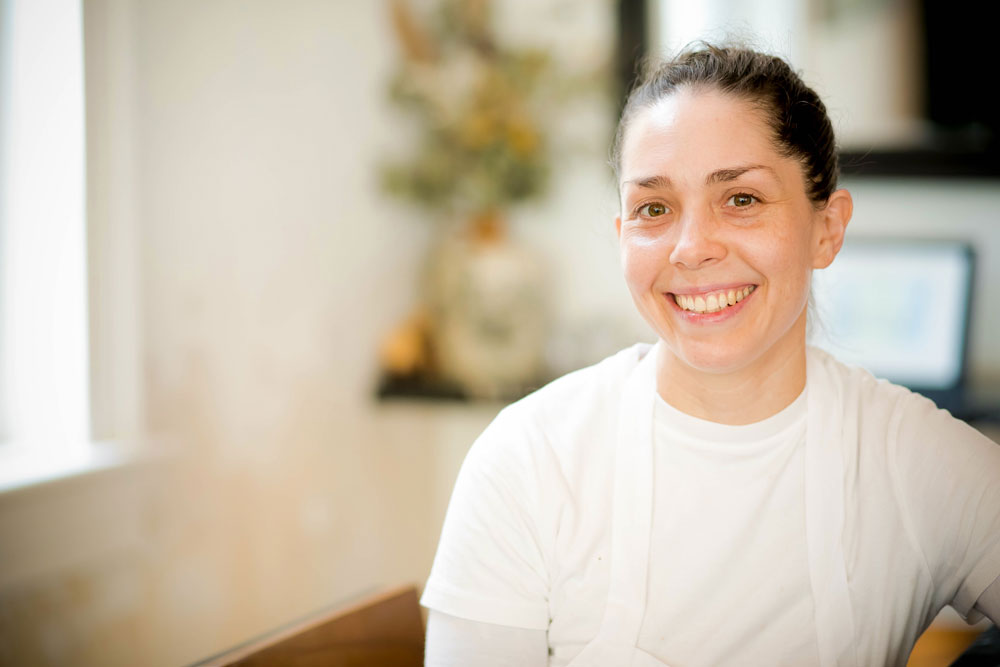 40 North is an evolution for Zozula, in which she speaks with an increasingly confident culinary voice. His menu delves deeply into his past experiences and draws inspiration from Eastern European culinary traditions which have a significant influence on the eating habits of immigrants to our region. All of this is built with a pantry of ingredients from suppliers such as be.wild.er Farm, Fet Fisk (his farm and prepared foods), Weatherbury Farm and Goat Rodeo Farm & Dairy – all of which embrace seasonality and agricultural oddities of western Pennsylvania. .

What sets 40 North apart from other restaurants in Pittsburgh is Zozula’s emphasis on western Pennsylvania lamb, arguably the best lambing region in the United States. As of press time, Zozula buys a lamb or two each week at the Halal Market & Grill in Salem in the Strip District; the owners of the butcher’s shop, international grocery store and attached Pittsburgh magazine’s best restaurant work with local ranchers to raise and slaughter lamb according to halal guidelines. Zozula brings in the whole lamb, which means that in addition to a rotating selection of excellent interpretations of more typical offerings such as braised lamb and grilled chops, you’ll find the pieces often thrown or overlooked in the United States. United offered as specials on Thursdays and Fridays (sometimes Saturdays if there are any left). 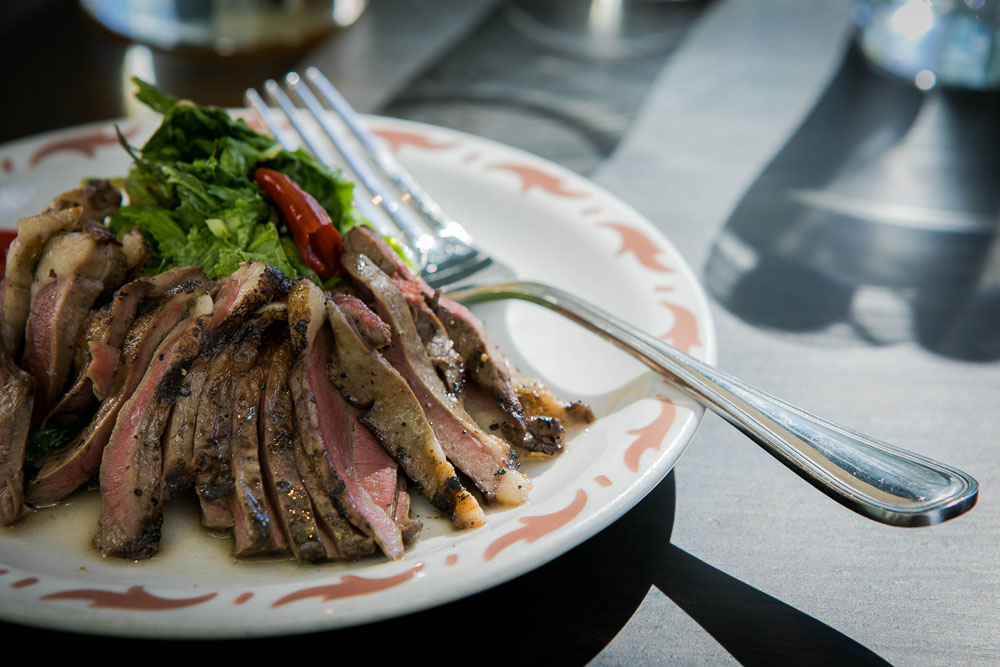 I had a heart of lamb on my first visit to 40 North. Seared on the grill and elegantly sliced ​​against the grain of the hard-working muscle, this was one of the best heartfelt dishes I have ever had. A few weeks later, my friends and I muttered, “Wowohwowohwow! That we devoured a lamb liver taco. The liver was coated with spices such as cumin and cilantro and fried crispy creamy. A good tomato, tender and crunchy greens and tzatziki completed the dish, which tasted like the richest (and least vegetarian) falafel imaginable. Although the shell is more flatbread than a flour tortilla, I would order it again.

“Bitter!” It might not be the first thing you would say if I asked you to shout out your best flavor descriptors, but Zozula shows a flair for how a dish could be tastier with the sharpness dial lifted from a hair. I remember being a little disappointed when I was presented with a khachapuri that looked like flatbread wrapped with soft cheese – an early mentor taught him this variation of the Georgian dish, which usually looks like a canoe in bread filled with cheese and eggs – first time I tried it. I converted to Zozula’s permutation on a later visit; this time, it was aggressively charred on the outside, giving it a delicious, invigorating bitterness that served as the perfect foil for the sour cheese. In August, I was wowed by a seasonal salad made with a mixture of grilled summer peaches, marinated and charred radicchio and sweet and sour pomegranate molasses. It was a study of how various permutations of bitterness could amplify the sweeter qualities of fruits and vegetables, especially when a creamy goat flavor was used to smooth things over.

Most of the main courses – there are usually six – also captivated me. Among these, a pan-roasted Jubilee Hilltop Ranch rib eye with a savory mahogany exterior and a medium-rare manual interior stood out as outstanding. The side sauces – a zing from the horseradish and the herbaceous powwow from the chimichurri – served to enhance the dish further. There are quite a few vegetarian options on the menu, and the falafel, intensely crisp on the outside but still nice and chewy on the inside, is worth a look. 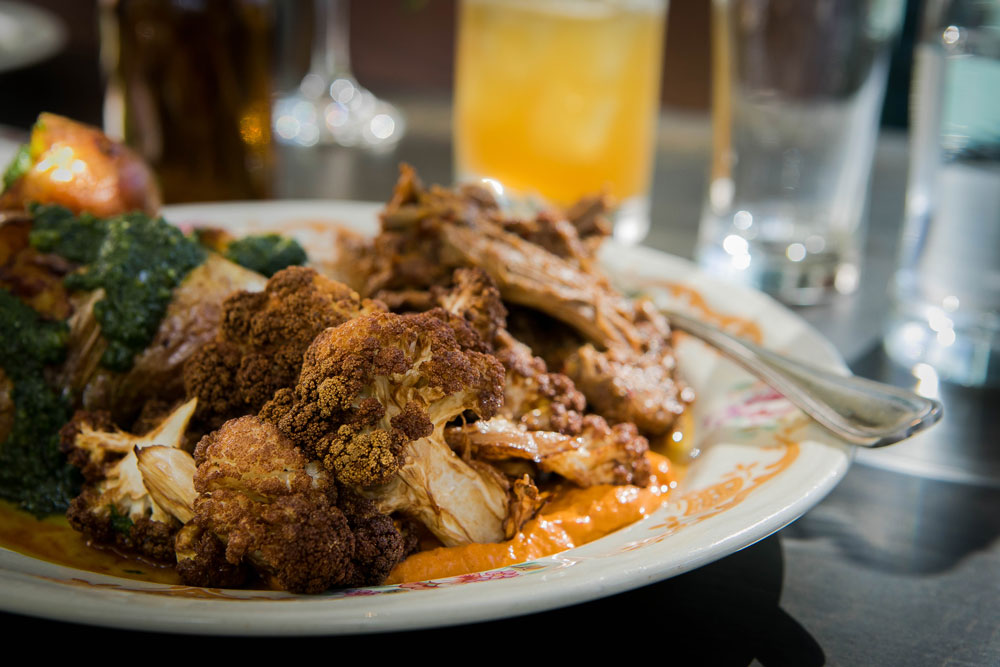 Each main course comes with two sides from a menu of six to eight options. Mashed and fried potatoes have demonstrated the universal appeal of potatoes. The ping-pong-sized potatoes had a bit of a pull in the skin, which gave way to a soft, buttery interior, with textures ranging from velvet to shatter-crisp around the edges of the crushed parts. The cauliflower was a crisp and beautiful highlight of the brassica, cut into neat florets so you can enjoy the texture in every bite. The only absolute failure was the eggplants. Gumy with the consistency of paper or paper glue, they have not been cooked in a way that showcases the richness of the eggplant or its ability to play well in various oils.

Two dishes, both from the small “Sandwiches and wraps” section of the menu, didn’t wow me either. 40 North’s spicy fried chicken could have been way crispier and the thighs were a bit spongy. It was by no means a rotten sandwich; instead, more of a general example of how it’s a good time to pause the ‘here’s our take on a fried chicken sandwich’ trend. And while a burger doesn’t seem out of place on the menu, the current version needs some straightening out. Alphabet City’s double smashburger (Colby, pepper jam, caramelized onions) didn’t feature the smashburger as advertised – instead it was two thin bar-burger patties and, worse yet, it was overwhelmed by a gigantic loaf of bread. Tavern-burger style that washed out any beefy fun.

Indeed, the entire “Sandwiches and Wraps” section of the four-item menu reads like a residual concept from the days when a lunch menu was being prepared; it is even placed at the bottom, although having it before the sector would make more sense. 40 North introduced Sunday Brunch after my report for this review (lunch service will likely launch in the coming months as well), and sandwiches, wraps, and burgers are on that menu. I think that’s where they belong – there is too much going on serving dinner (even if you stop for a quick bite at the bar) to warrant including these deviations from the overall philosophy of the hotel. menu. I would much prefer to see an appetizer section expanded with delicious and affordable snack foods to munch on. 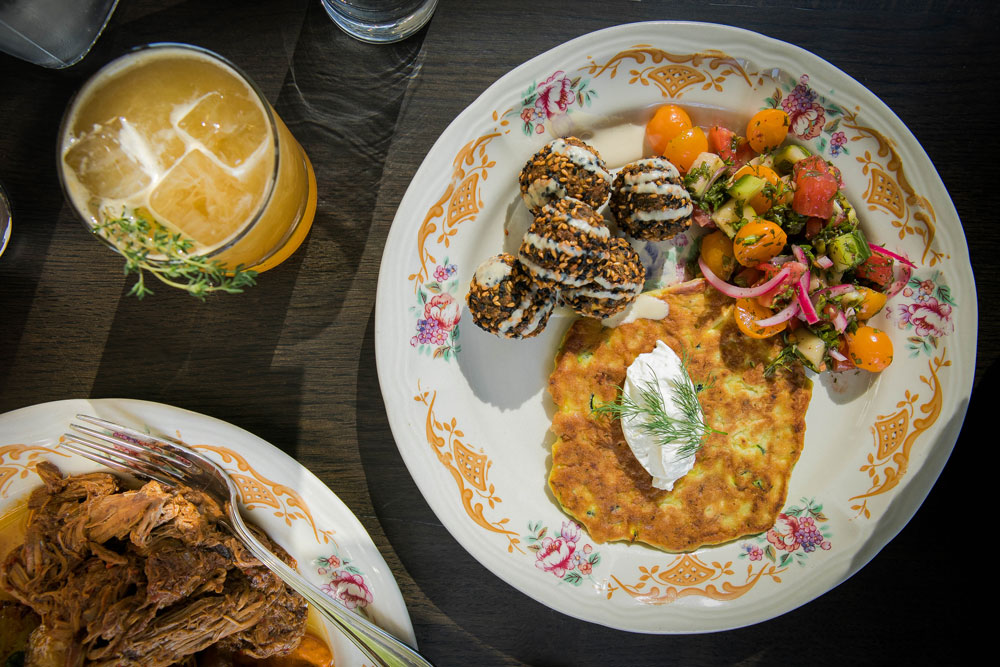 Don’t forget to end your meal with a dessert. Everything I tried was exceptional; heart cream, a light and charming, heart-shaped, no-bake, crustless cheesecake on which Zozula paints a canvas of seasonal berries and flowers and the garnish of toasted nuts, is a gem. Another great option is the warm peach pie, which has a buttery crust filled with not too sweet and delicately spiced peaches that retain some of their texture, topped with cinnamon-oat streusel and vanilla ice cream.

Casellula and Bruges on North, the two restaurants that previously occupied this space, closed before the age of two. I’m pretty sure 40 North will have a different fate. The food, drink menu, design, and overall feel of the space are the first ones I’ve experienced that feel connected to the building as a whole rather than offering oddly disorienting neutrality or even trying ignore the fact that the whole floor shares energy. Zozula’s menu prospect and celebration of the region’s agriculture make it a destination rather than just a place to dine. The reception staff organize the same situation on an experiential level. Everything combines to make an excellent restaurant.

When I stepped into the new Bedrock Origin, I didn’t expect to eat dry-aged fish. Isn’t seafood better when it’s fresh? Not always, said the experts. Having the catch of the week or last month might seem counterintuitive, but dry-aged fish can improve its flavor and texture. The age-old method removes moisture, including residual blood […]

Have you been walking down St. Marks Place lately, the block between Second and Third Avenues? Since the beginning of the alfresco dining, it seems the noodle bar scene in “Blade Runner”, although the weather is generally better. Tartan pants with a profusion of zips at Trash and Vaudeville decamped for another street a long […]

MIXED PARRILLADA gThe third iteration of aucho Parrilla Argentina opened in mid-2020 in the space formerly occupied by Six Penn Kitchen. Gaucho 3.0 is popular. There are over 150 seats, but reservations are hard to come by (tip: because of the way they’ve set up the reservation system, it’s easier to reserve a table for […]