II fell in love with Fig & Ash’s double cut pork chop. It is soaked in a brine enriched with apple cider vinegar, paprika, thyme, cinnamon, garlic and cloves before being cooked in the wood-fired fireplace at North Side Restaurant. The moment the chop is removed from the grill, it is encased in a smoky crust. One iteration I had in July was dressed in a sweet and tangy pineapple-habanero sauce giving off a mellow heat that paired harmoniously with the luscious fat melting of the luscious pork. It has become a signature dish of the restaurant, which is currently one of the best in Pittsburgh.

Pork chops are also part of Fig & Ash’s origin story. Executive chef and co-owner Cory Hughes hosted weekly Sunday dinners with his family. They had an open door policy, neighbors, family friends and anyone else who showed up on any given night guaranteed a tasty meal and great company. One of those nights, Hughes, then running food operations at Google headquarters in Pittsburgh, was grilling chops and burgers in his backyard when he had an “aha” moment. He had been brainstorming restaurant concepts with his wife, Kate, and brother-in-law, Alex Feltovich, but they hadn’t quite figured out what to focus on. He turned to Feltovich (now part owner and operations manager of the restaurant) and said, “Let’s go. Sunday dinner with us. 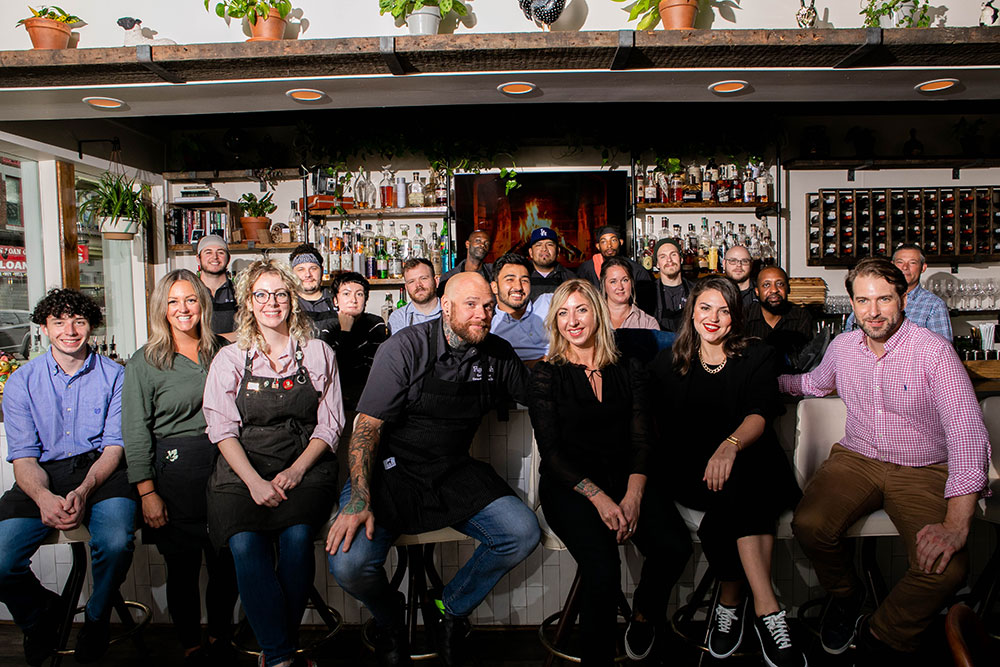 THE FRONT AND REAR CREW AT FIG & ASH

It took a few years to get there – construction challenges and the COVID-19 pandemic caused significant delays – but Hughes’ vision of a Sunday dinner is now working full blast on East Ohio Street. What makes the establishment interesting to visit (and frequently to do) is that the Fig & Ash version of Sunday dinner turns weekend comfort classics like meatloaf into a destination meal. Even on a hot summer night, I was looking for extra forks of the savory blend of short ribs and pork belly dressed in a tangy horseradish crème fraîche that cut through the richness of the meatloaf. Tender and buttered carrots, a delicious farro pilaf and a mash of peas each add strong notes to the plate. Even for those of us who love to cook at home, it is certainly nice to visit a place where someone else is doing the work for you, especially when they pay attention to detail and the layering of flavors. . And that’s precisely what happens at Fig & Ash. 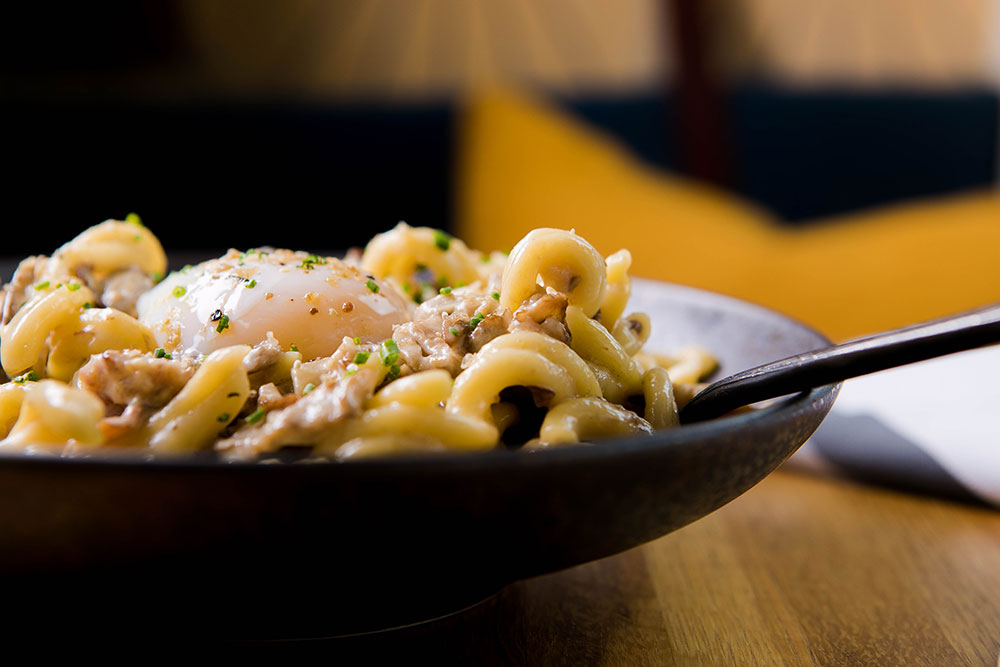 Hughes worked hard to get here – prior to his job at Google, he was executive chef at Six Penn Kitchen and sous chef at restaurants such as Eleven Contemporary Kitchen and Spoon, as well as for STARR Restaurant Group in Philadelphia. You’ll see the exuberance of the former U.S. Marine Corps cook in feeding people in the foreground as he steps out of the glass-fronted kitchen to work in the dining room. You will discover his strength in team building with the cohesive full spectrum cuisine sourced from the kitchen he runs with Chef Chris Shuplock. 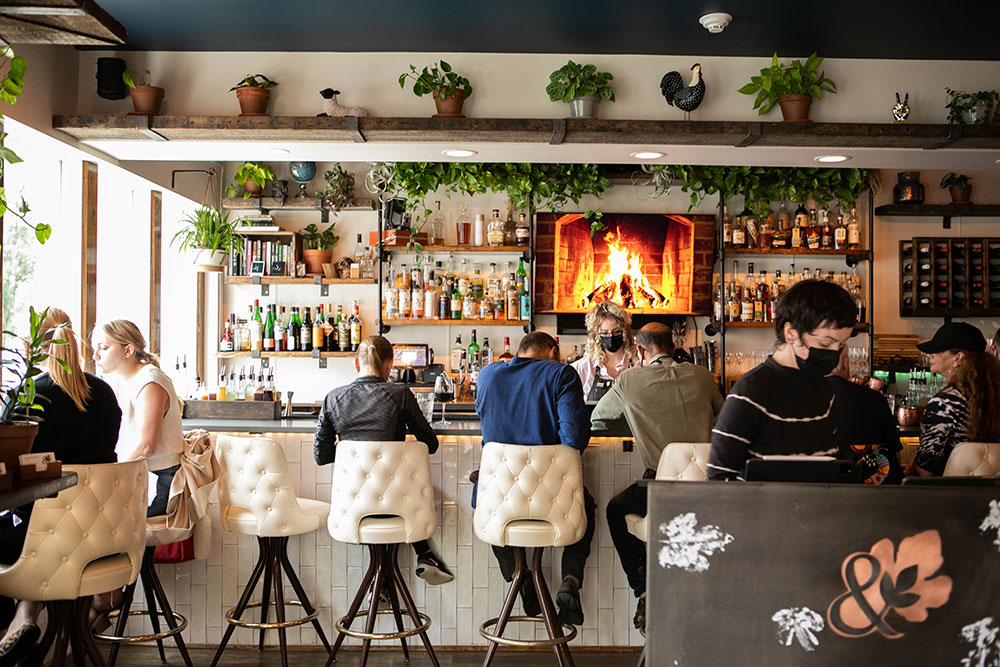 A shining example is the Moroccan Elysian Fields shoulder of lamb with Israeli couscous, spinach, almonds and mint labneh. Shoulder of lamb is often put aside in favor of boneless squares, chops or thighs, but a few bites of caramelized but melted meat at Fig & Ash shows why the often underused cut should be featured more often. It’s even more of a treat here because the lamb is from Waynesburg’s Elysian Fields Pure Bred Lamb, one of the best producers in the country. The raab that came with it was cooked tenderly crunchy and finished with a nice char on the grill, and it’s not often that I find couscous in Pittsburgh that’s cooked appropriately to look and taste like pasta while eating airy like a grain.

Meals are delivered by a gracious group of hospitality professionals; from a lively seat at the bar to one on the cozy four-season patio, hospitality is at the forefront at Fig & Ash. The North Side restaurant is barely a year old – it opened last September amid the COVID-19 pandemic – but it is already vibrating like a favorite populated destination where you’ll feel (and want to be) a regular if you are. come several times. The restaurant is also a great place for a romantic evening or a place to take someone from out of town. 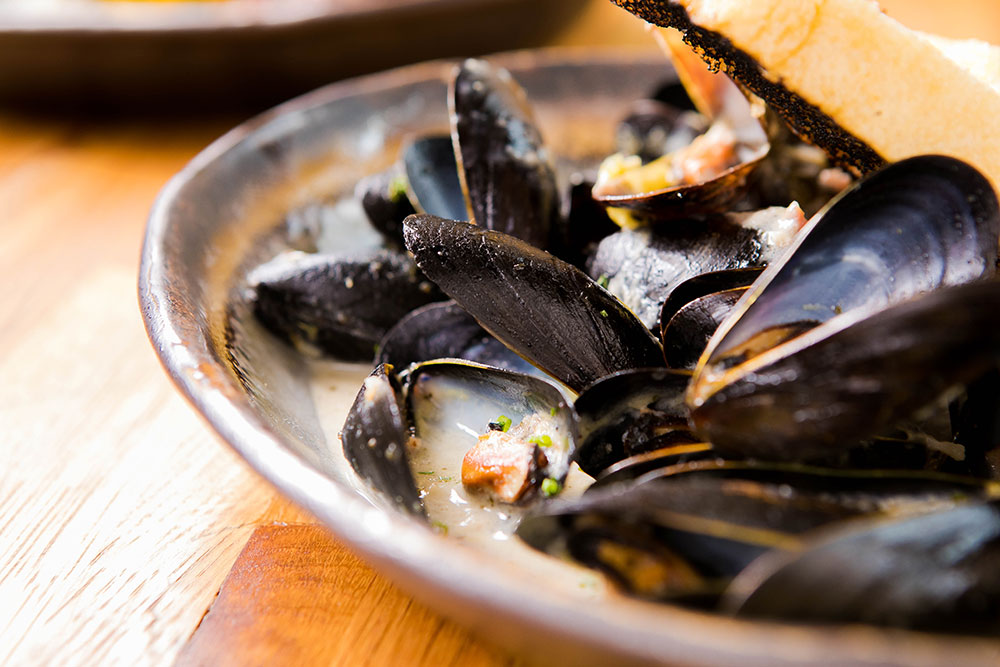 You would also not know that there is a shortage of personnel throughout the city; the service always felt leaning forward. Credit General Manager Rachel Sinagra, who has developed a very thoughtful hospitality process that doesn’t show her work. What that means to you is a meal with orchestrated service that feels effortless and is packed with adorable little touches, such as keeping leftovers at the host’s booth until you’re ready to go. go. I’m also happy to report that the sharing plates are an appropriate size here.

The dining area is also cozy, professionally done but not overly designed. There is a plethora of houseplants everywhere, and every nook and cranny is filled with quirky art. The only downside are the bathrooms, which transport you to a Pier 1 Imports showroom or the decor aisle of a Target store. 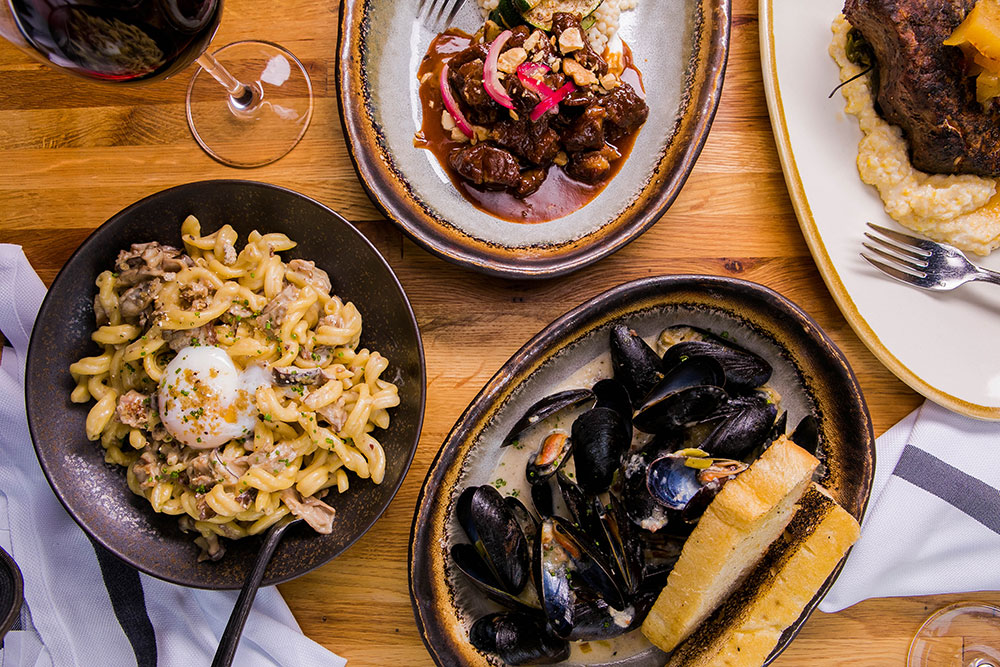 Certain menu items, such as heirloom carrots, have become a mainstay of Fig & Ash. They are roasted in the sole of the restaurant (source of many starred dishes) and served with whipped ricotta, honey, roasted Marcona almonds and brown sage butter. The smoky sweetness of carrots is amplified by each element, balanced by the triple threat blend of ricotta fat, butter and almonds. I’m not sure if this should always be on the menu – it’s one of the few dishes that has been served as is since the restaurant opened – but I don’t mind either, especially since they serve as a barometer for how well the kitchen continues to focus on the little details.

Most plates reflect the season, but I also think there is room for improvement around the edges when it comes to seasonality.

One evening in July, I had a strip loin served with roasted Yukon potatoes, asparagus and a roasted cipollini demi-glace. “Oh, now it’s a steak! A friend and I both exclaimed as our knives slid through a salt-crusted caramelized crust in a cartoon illustration of what a medium rare steak should look like. And those potatoes were pretty perfect too. But why asparagus in July? Why not take this American steakhouse classic and lean into the season with a vegetable like kohlrabi?

I was wondering the same about seasonality as I ate a bowl of ooh-and-ahh, technically perfect gnocchi, served with guanciale, Calabrian chili, San Marzano tomatoes, and Parmesan cheese. But, as tasty as the sauce was with those canned tomatoes, I would have preferred to see the winter version offered and enjoy a cherry tomato celebration, barely in the middle of summer, when I had it. On a later visit, green pasta with spring vegetables – the only dish I’ve had at any meal and felt right about it – made me wonder why I was eating a dish that belonged to in mid-May on a hot July night. 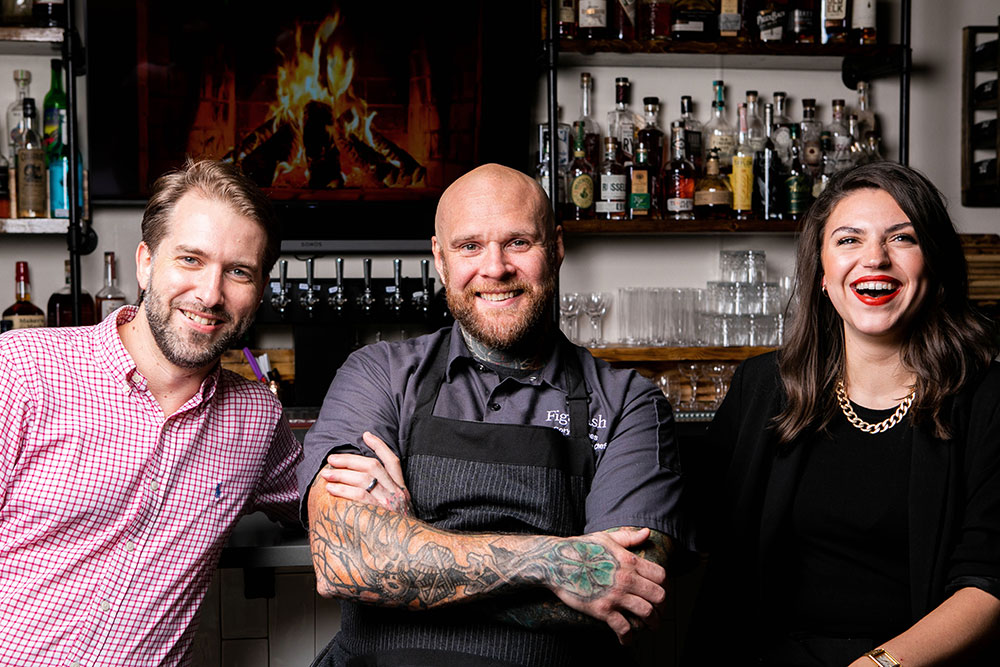 Otherwise, I loved the small selection of pasta at Fig & Ash, especially since it allows customers to order half portions. A friend and I added a half of gemelli to the mushrooms from the Fun-gal farms, and it turned out to be one of my favorite dishes at the restaurant. Mushrooms from local mushroom farmer Holly Scott are paired with cream of shiitake, bacon, poached eggs and just the right amount of thyme to accentuate the seemingly simple but very nuanced dish that made for a mind-blowing dish.

There are usually around five bespoke cocktails at Fig & Ash, and most I’ve tried were flavorful, balanced, and had smart names. Drunk Off Uranus, a tasty spin tiki with gin, passion fruit syrup, falernum, orgeat and lime, works well as a before or after dinner drink. It’s The Fennel Countdown (fennel syrup, barley syrup, five-spice, lemon, soda) is an easy-to-sip spirit-free drink for those looking for something sparkling but choose not to soak up. And the wine list is restaurant-themed rooted in a classic canon but doesn’t sit on its heels in executing how to build its dishes. “They did a good job delivering the classics, but also throwing us some bones,” a friend said.

If teamwork and energy continue to develop as they have been, with an elegant bow that slowly tilts upward, Fig & Ash could become one of Pittsburgh’s premier restaurants for years to come. future. And, as the weather cools and we head into high season for comfort food, I look forward to the next steps on this climb.

[ad_1] ILeicester Square and all that garish is easy to laugh at – the pure sea of ​​humanity, the queues outside the Lego store, the screaming lights of M & M’s World, the street performers painted in silver, the constant fear of being picked up at any time… I could go on. Its only winning […]

[ad_1] This would be almost impossible living up to expectations surrounding Minnesota’s newest restaurant in the Twin Cities’ first five-star hotel from our most beloved celebrity chef. So how come Gavin Kaysen’s Mara, inside the Four Seasons Hotel Minneapolis, not only meets these expectations, but exceeds them? Maybe it’s the team: Kaysen’s chef is Thony […]

[ad_1] At Sisters Thai, the boat noodle soup features thin rice noodles, beef meatballs, sliced ​​pork and Chinese broccoli in a pork broth flavored with a touch of black soy sauce. Photo by Laura Chase de Formigny You know since As you sit down at Sisters Thai, this presentation is of paramount importance to the […]