It’s precious. It’s horribly expensive. It is booked months in advance. Why 15 years after starting its remarkable run in luxurious Japanese bites, O Ya is perhaps the city’s most sublime culinary craze.

There is a scene in A pretty woman where Richard Gere takes Julia Roberts to her first opera and, as the lights dim, ups the ante. “[First-timers] either they love it or they hate it,” he explains grimly. “If they don’t, they can learn to appreciate it. But that will never be part of their soul. Roberts’ quivering lips, leaky eyelids and niece’s gasps of joy, choreographed on stumps of a La Traviata highlights, give us all the answers we need.

That’s pretty much how it’s been every time I’ve brought someone for their first meal at O ​​Ya, Tim and Nancy Cushman from a Japanese luxury tavern that opened in the Leather District in 2007. I can’t think of a restaurant in town with more individual dishes possessing the power to provoke visceral reactions in the eater that border on sensuality: involuntary gasps, conspicuous goosebumps, sotto voce holy shit. My friend Susan, a distinguished Southerner, once became so… taken with a bite of tuna-bellied nigiri that she draped a cloth towel over her head, ortolan-style, to ride the waves of delights in civilized solitude. I shall have, as they say, what she has.

The 18th century philosopher Edmund Burke called this temporary unstable feeling elicited by a work of art the Sublime. And I think there’s something to that at O ​​Ya, where the best dishes have always hit the center of pleasure with the immediacy of a Rothko.

In case you are wondering why I am reviewing a 15 year old place, let me assure you that it absolutely wasn’t an interested ploy to dine at Boston’s most expensive restaurant at the magazine’s expense. It was just a side benefit. But the dizzying cost of a meal – the 20 dishes omakase Will cost you a cool quarter mile before you even open the drink list – didn’t figure it out. See, I can’t go a week without being contacted for advice on where to go in town for not just a meal but a party. With most of my standard five-deep shortlist either closed or on the injured list, limping from pandemic-related woes, I finally figured it out: maybe I should be sure which one is still standing. ? So I went there. Now I’m sure. 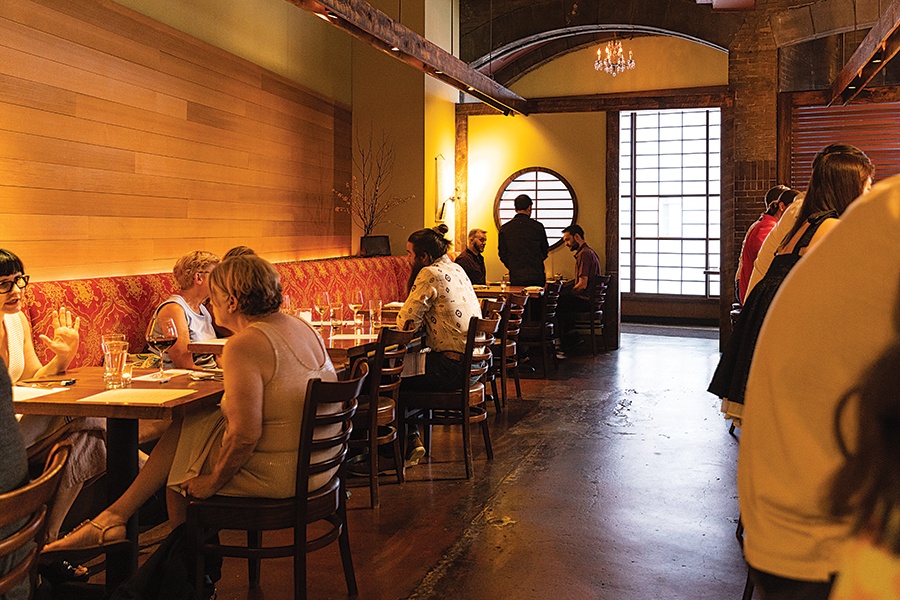 The slender 24-seat dining hall of the former O Ya fire station. / Photo by Linda Campos

Starting with signing Tim Cushman hamachi nigiri with banana-pepper mousse, a dish that has been on the menu since day one. A velvety strip of raw amberjack is marinated in homemade soy to up the umami quotient, then draped over a rice dumpling. A dollop of neon yellow-green mash made with banana peppers, butter and good old-fashioned truffle oil is placed in the center seconds before the whole mess is hit by the commercial end of a sizzling blowtorch on every surface in its path, evoking an intoxicating Maillard-bound alchemy of smoky, charry capsaicin and savory notes of toasted marshmallow without compromising the classic interaction between raw rice and the rice of the inner layers. File under: always magic.

Even fine masterpieces can benefit from a new energy, which in the case of O Ya was the hiring of Nathan Gould, a chef recruited in 2015 to oversee the daily life of the flagship, while the Cushmans turned their attention. to spin-offs in New York and possibly Mexico City. During my first meals under Gould’s watch, his creative impact seemed…subtle. O Ya had always been about the staples, many of which hadn’t changed since the start. Gradually, however, Gould became more collaborator than delegate, bringing more vegetable dishes to the menu, more local ingredients, more seasonal rotations. Gould tells me that adding something to the lineup is sometimes a weeks-long affair that requires kicking in from the entire team (Tim and Nancy included), and by the time you’ve cleared the hurdles , the blue fish could be up and gone. Dishes that make it through that gauntlet aren’t just a testament to perseverance in the face of the rigors of preservation, they’re also typically the best bites of any given night.

In May, a kombu-cured spring mackerel nigiri made an appearance, dressed in crisp scallion cracked ramp oil and a citrusy kick of fiery Meyer lemon. kosho made with fresh green chilies and more ramps. Savage ika, meanwhile – fished in the Atlantic, not flown in from Japan – was noted in a criss-cross pattern not only for the tenderness but also for the way the slashed edges become charry-crispy grooves when struck. with a torch. Brushed with a sticky-sweet soy-mirin-dashi glaze, burnt to create haunting burnt sugar notes, then brightened with lime juice and salty cherry blossoms, he danced an elegant textural pas de deux with the delicate sushi rice ball underneath, and either way…it’s the teriyaki squid of your dreams, so keep an eye out.

The reason I focus a lot on nigiri is because, as a category, it had more of an impact than the sashimi dishes I’ve tried. I suppose the difference has more to do with the dawn of the Grand Crudo era of the mid-2010s – which saw a surge of new creative energy on the riceless raw fish front – than with technical merits relative. All were excellent. But also, the bold flavors that Gould and Cushman like to play with tend to benefit from minimal neutral white space. Meanwhile, the cooked side of the menu was tighter than ever, with slices of charcoal-crusted Wagyu beef and the silkiest chawanmushi egg custard – sprinkled with fluffy drops of Unitedsalted caviar and thick salted dashi fillets ankake— never served in Boston.

A few downsides: The restaurant has suspended à la carte for COVID reasons; for regular customers, the option to choose your own exorbitant adventure offered attractive flexibility. I feel like a few proven experiences are nearing retirement age: (Kumamoto oyster with watermelon pearls, I’m looking at you.) And there was a hirame usuzukuri with ponzu one night which tasted scrappy and harsh, the only one downright missed. But I parted with four stars for seals with much more serious flaws. 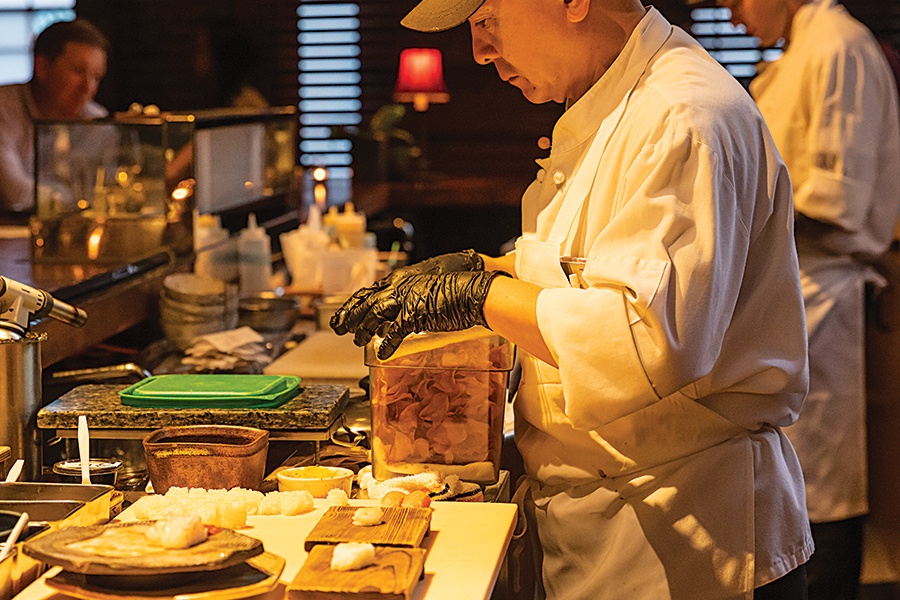 Of course, the Cushmans’ brilliance isn’t just in Rothko’s edible making. It is also in their prescience. The year 2007 was only 15 years ago but also centuries ago. The gastronomic landscape of the city was going through tectonic changes. The small plates had not broken the hegemony of the starter-main course dinner structure. This exceptional food could be served in a relaxed, casual setting, not a hushed formal dining room, was always a radical idea, as was the idea of ​​eating raw fish without your own personal trough of soybean paste and wasabi. Then came O Ya, with its B-side rock soundtrack, exposed brickwork and disruptive-style audacity. The audacity to charge $17 for two bites of sushi. The audacity of excellence.

The audacity also to give priority to a supportive and stimulating work environment at a time when, especially for restaurants, it was a fairly new idea. The first time I met the Cushmans was in the cramped dining room of O Ya a few weeks before opening night. I was interviewing them for a little excerpt from a magazine article… or rather, trying at. They kept interrupting me mid-sentence to greet each newly arrived employee individually. “Konnichiwa, Hiro-san! they said in unison, lowering their heads. I remember thinking that was awkward, even a little performative, coming from the white owners of a Japanese joint. Not to mention that I was sitting there in my official capacity as a part-time presentation writer for the Improper. Didn’t they know who I was?

Fast forward 15 years, and there’s Hiro Konishi, the sushi chef, still behind the counter cutting the fish. Tim (no relation), a server who dropped off my first hamachi-banana-pepper in 2007, filed the one I just devoured in May. Meanwhile, five O Ya alums made our Best of Boston 2022 list for projects they’ve since moved on to — the kind of chasing your dream magic the Cushmans are known to champion. Looking back, I can see that at the time, I was maybe a bit quick to judge.

For this round, however, I took all the time I needed.

Indulge yourself at The Waterside restaurant in Inverness

[ad_1] This year has undoubtedly been the year of the staycation. Whether it’s braving the 12-hour door-to-door drive to Cornwall, hitting the hills armed with a tent and whatever else you can pack, or packing your bags in local day trips, it’s been another year of truly exploring what’s in front of our noses rather […]

[ad_1] Dubai – Register for happening restaurants in the city Posted: Wed Dec 8 2021, 18:49 Last update: Thu. Dec. 9 2021, 21:14 Let’s read this story backwards. There are no spoilers here, just tons of delicate sweetness, if you might call it the festive dessert platter. We’re at the Weslodge Saloon, JW Marriott Marquis […]

[ad_1] Sometimes timing is everything, and when you get it wrong, it can go wrong. It had been a while since I had a few of my school friends together, so I arranged to meet them for Sunday lunch. I’m not the biggest roast fan, but they love it so they figured it wouldn’t kill […]