The whimsical world a team of seasoned industry veterans has created on Boston’s waterfront is filled with buried treasures.

Foodies and restaurant newbies love The Feed. Sign up now for our bi-weekly newsletter.

Nautilus Pier 4 offers cuisine from around the world, including Sichuan eggplant, at Boston Seaport. / Photo by Jenna Skutnik

The nautilus, an intricate tentacled creature with a shell similar to the spiraling eye of a hurricane, is a cephalopod mollusk (read: squid-like creature) that dwells far below the ocean’s surface during the day and rises to stand feed in shallower water at night. His portrait marks the vestibule of Nautilus Pier 4 in the Seaport, the new brother of the Nautilus restaurant in Nantucket. The Nautilus is also the name of the fictional submarine commanded by Captain Nemo in the novel by Jules Verne 20000 Leagues Under the Sea, which paints a picture of an anotherworldly ocean – muted depths that might teem with mythical mermaids, giant squids or sunken jewels. Likewise, the whimsical world that industry veterans Liam Mackey, Clinton Terry, and Stephen Bowler (food, liquor, and wine respectively) have created on Boston’s waterfront is also filled with buried treasures.

Inside, matte brass and gold accents shine like gold coins in a chest. Wooden tables, round cuckoo mirrors, and enormous arched entrances evoke portholes and slanted hulls of old ships in maritime paintings. Virtually every section of the 210-seat restaurant has a view of the water, and the natural light from the harbor-facing windows shines against the deep blues, blacks, and greens of the restaurant interior. 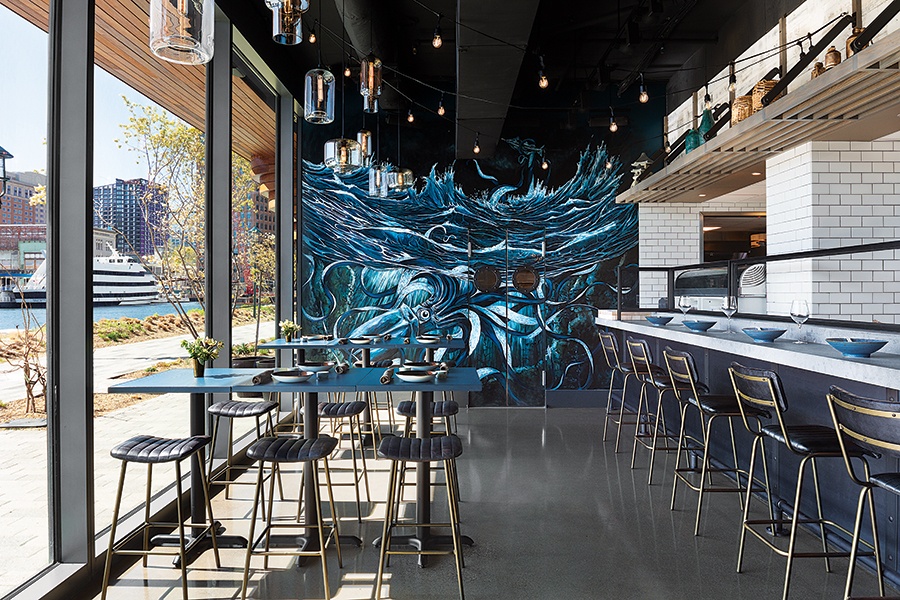 Influenced by the hearty Japanese food izakaya and the tapas-style shared platters an integral part of Spanish cuisine, the food and drink menus, meanwhile, sail primarily through coastal New England, Asia, Latin America and the Mediterranean, from regions where satisfying dishes are often infused with grilled, puffy, fried, herbal, and fresh citrus flavors. Mackey, the culinary director of Nautilus, has put former Tres Gatos chef Stephen Marcaurelle as Boston head, whose talent is evident through a range of small and large plates, as well as table treats. One evening, I started with Silky Sichuan Eggplant ($ 15): spicy and smoky, it was bright with herbs, pickled peppers and fried garlic. It was so good that I ordered it on each visit and even considered taking it back “for dessert” once. Next came the Grilled Giant Asparagus ($ 12) in a gorgeous coating of smoked egg yolks, Chinese mustard, and Marash pepper that reminded me of the secret sauce of an In-N-Out burger, in the best way. possible. 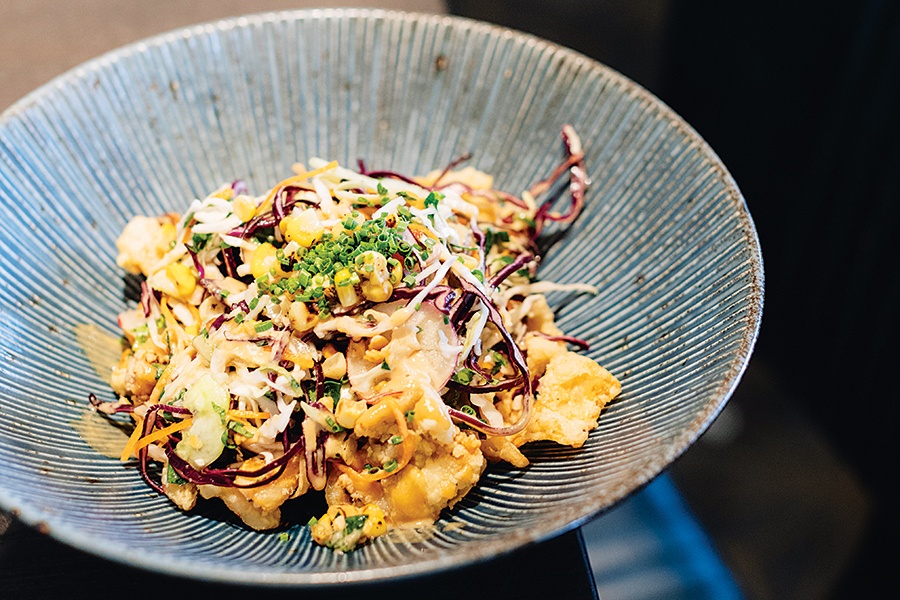 A Thai-inspired lime sauce adds a hint of citrus to the crispy squid. / Photo by Jenna Skutnik

Seafood, perhaps unsurprisingly, is great across the board, especially the crispy pickled calamari ($ 19), filled with wispy tangles of shredded cabbage, salted peanuts, herbs, sweet corn. summer and the sweet-spicy zip of a Thai-inspired lime sauce. The hamachi necklace ($ 17) wrapped in the same way, with lemongrass, sweet and sour tamarind, dried shrimp and chili before nam prik.

Larger, shareable plates replace the main courses here, but if you want to pass them around the table, that’s another story. In minutes, a bowl of chewy Szechuan dandan noodles ($ 27) slippery with ground pork, peanuts and a myriad of herbs. A cute pile of blue crab fried rice ($ 34) was draped with a lace edged egg and runny yolk, very easily. The nicest highlight, however, was the whole roast peking duck ($ 115), a beautiful tanned bird stacked on white rice with a ginger and green onion sauce, bibb lettuce leaves, pickled radishes and cubs. steamed breads. 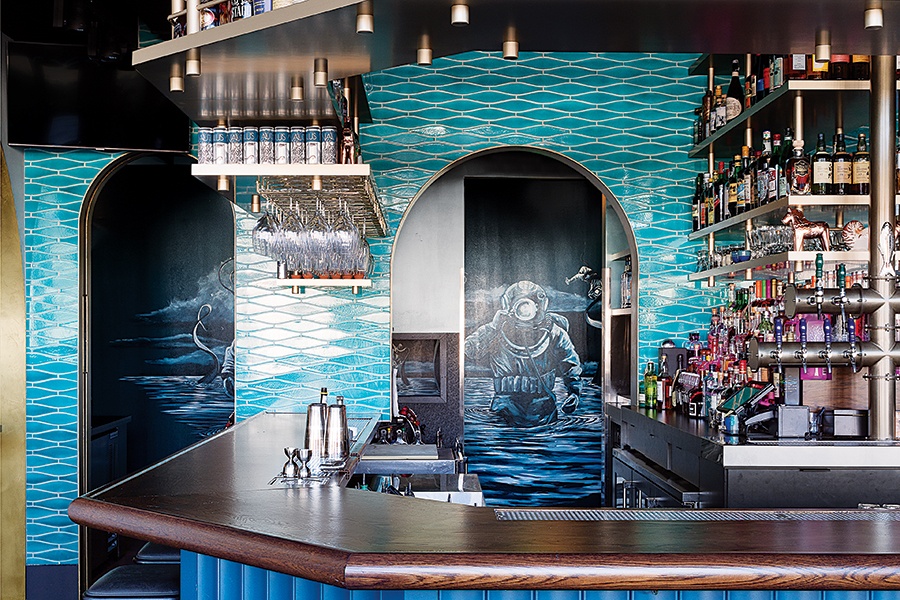 The nautical-inspired bar is a wonderful place to sip cocktails. / Photo by Amanda James / DD Representatives

You’ll need plenty of room to dig into the duck, so it’s a good thing that even the wide polished bar on the Nautilus Pier 4 seems tailor-made for sharing. On a moonlit Monday night, it sparkled like an underwater pool as it regularly filled with people, the curved bowls of wine glasses capturing the glow of the waterfront. It was no surprise to see crowds, given the excellent cocktails (though bordering on the name cheese) including the “Teach Me How to Dougie” ($ 16), a simple pitfall with mezcal, ginger and juice grapefruit. There’s also a section devoted to ‘Coffee Drinks’, like the Nespresso Martini ($ 15), a stellar example of the recent’ 90s cocktail resurgence. On my summer visits, Fernet Branca ($ 7) m ‘was offered from a tap dedicated to rotating refrigeration digest, enough to polish one of the two desserts: jars of cream Catalana ($ 11), a velvety orange-based cream made from the richness of egg yolks, as well as soft ice cream ($ 7) from La Bottega de Somerville. The extensive wine and sake list, co-curated by sommelier partner Bowler and wine director Griffin Phelan, reflects the restaurant’s globetrotting vibe, with eclectic bottles ranging from enigmatic, skin-to-skin whites to magnums of old world pinot noir. 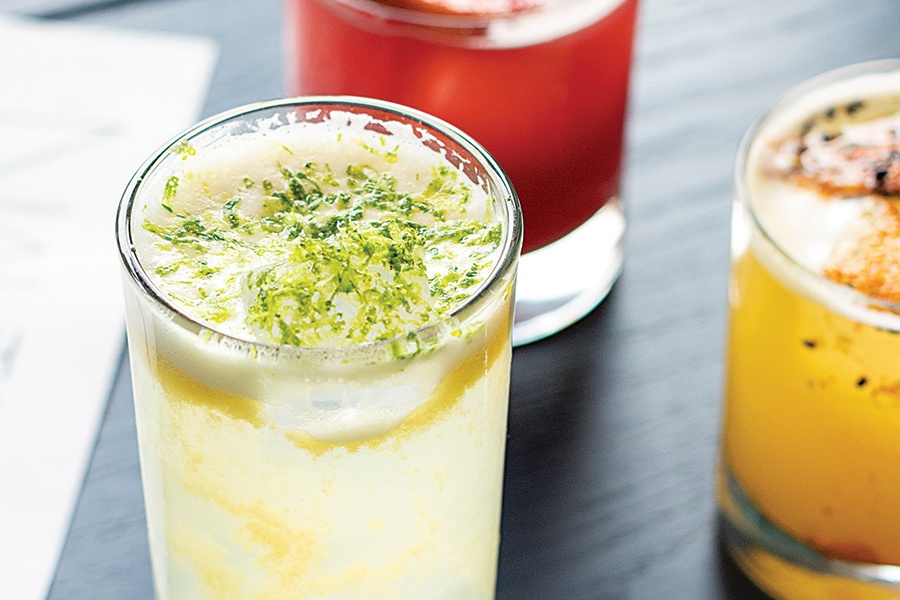 The cocktails are fun and well prepared. / Photo by Jenna Skutnik

The hospitality at Nautilus Pier 4 has balanced this same exploration philosophy with the comforts of home. While some things on the menu were unknown to my dining room mates, the staff, from bartenders to waiters, seemed genuinely happy to solve all the mysteries. Conversations with the crew were like exchanges with friends who, who knew! porron pour.

After finishing a meal on a summer evening, I followed the seaside path from the restaurant to Fan Pier Park, watching thousands of windows across the skyline turn orange as the sun sets. I remembered how, as a child of Boston sailors, I watched giant tankers cross the harbor and wondered how something so big could float so easily.

I think back to it when I think of Nautilus Pier 4. While the reverberations of COVID-19 are continual and we still face uncharted waters, this restaurant is currently in a crowded, sea-swept part of the building. salt water and incredibly beautiful. the city is like a balm. A generous spirit saturates every experience – I felt it as I grabbed last minute bar seats in sweatpants after a long day of traveling, as my table mate chose a bottle of wine with our waiter, under the care of a bartender while teaching a back bar how to make the perfect martini. Even after a parade of good intoxicating food, it was this feeling that sparked a recurring thought: what a time to be alive in the seaport.

Highlights of the menu

For almost two years, traveling to enjoy delicious meals in other countries has been discouraged or difficult, if not entirely impossible. Hawksmoor, a popular British group of nine London-based steakhouses, has finally done something about the situation. Since September, there has been a 10th Hawksmoor, on East 22nd Street, ready to serve Americans who follow […]

Saga matured duck with beet tagine, m’semen bread and chicory salad. Photo: Adam Friedlander Why do I feel like ten years ago people stopped eating like that? my guest whispered shortly after the relentless parade of waiters, hosts, and beverage experts who populate the suite of cocktail nooks and dining spaces at the new tasting […]

Published: 07:14 april 30, 2022 Pair dedicated owners with a chef with a Michelin-star CV and you have a village pub-restaurant that has quickly become a staple, writes Richard Cawthorne. Alex Parker’s career began when, just before graduating from hotel school at the age of 18, he walked into the kitchen after eating at Gordon […]