Tourists are writing scathing reviews to warn fellow Australians to stay away from a popular outback town as youth crime threatens to destroy its reputation.

Travel website TripAdvisor has been inundated with reviews warning tourists on road trips to northern Australia to avoid the mining town of Mount Isa in Queensland.

According to the latest crime data, Mount Isa has a property crime rate of 1,167.37 incidents per 100,000 city residents, more than triple the state average.

A Sydney family, who left Mount Isa before their booked three nights’ accommodation was over, have explained why tourists should stay away.

“I really hate leaving bad reviews and this one is pure and simple based on juvenile delinquency,” the family wrote.

“I would not recommend anyone to stay at Mt Isa. We found the managers to be very friendly and helpful, but unfortunately this does not alleviate the crime problem.

“My advice is to stay away from Mount Isa.” 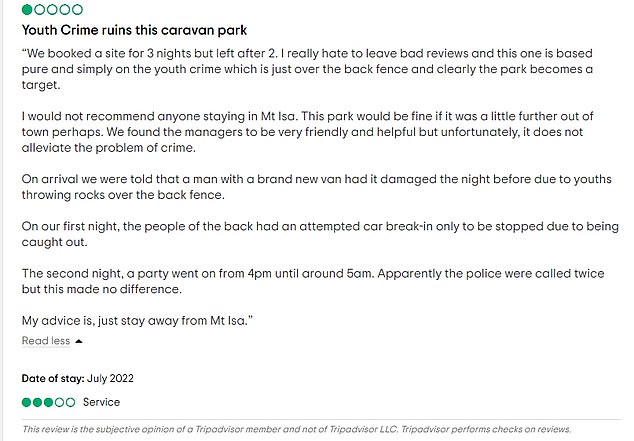 Another family acknowledged that the amenities and campsite they were staying at were good, but raised concerns about safety.

“There are no doors so anyone can enter at any time and that is not acceptable in a city with so much crime already,” they wrote.

“I will NEVER stay here again and am posting this to hopefully help others decide NOT to stay here as it is dangerous and we were extremely uncomfortable all night.”

A third NSW couple titled their review ‘Avoid, Avoid, Avoid’ after spending several weeks waiting for their car to be repaired.

“We were here 16 days. At that time, the people next to us had their wallets stolen from a car,” they said.

“Our van door was opened at 2:45 a.m. one morning. A few days later, around 2:30 a.m., voices rose around the blind man just to see a teenager reach the doorknob in time.

The online criticism has drawn the ire of local state MP Robbie Katter, who has urged Queensland Premier Annastacia Palaszczuk to “show leadership and step in” to address the issue.

Although he admitted to Daily Mail Australia that youth crime was a huge problem in the town, he said he did not want to deter tourists from visiting the area.

“My advice is to take precautions,” he said.

“Most of what Mount Isa has to offer visitors is outside the city and is incredibly spectacular, which should appeal to all Australians.”

Mr Katter said local tour operators were doing their best but had been hampered by the lack of government intervention to tackle youth crime.

“It’s a double-edged sword for them. They want travelers to come here, but at the same time they can’t ignore the fact that it’s a problem,” he said.

Island BMX Club, a local bike spot, was one of the city’s most recent casualties.

Vandals broke in and burned down the club last week, leaving a trail of extensive damage. 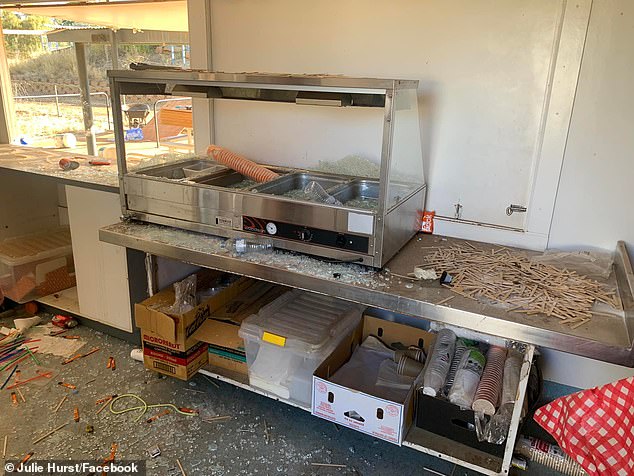 Travelers have left a series of scathing reviews of Mount Isa online on TripAdvisor. Pictured is the recent vandalism of a local BMX clubhouse 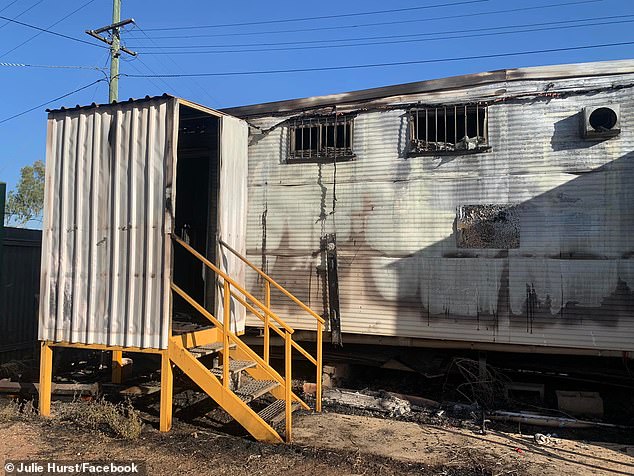 It was the latest blow for the club, which was already struggling financially after the pandemic and was only operational thanks to the generous support of local businesses.

Heartbroken officials shared photos of the damage, including scorched walls and inside the ransacked clubhouse where items including food had been strewn.

“The toilets and showers are completely burnt down and will be condemned,” the club wrote.

“The club house was destroyed with almost all the equipment smashed, doors and windows torn out and general damage to the club and the track.

“At this time, we don’t know what this will mean for the future of BMX at Mount Isa.” 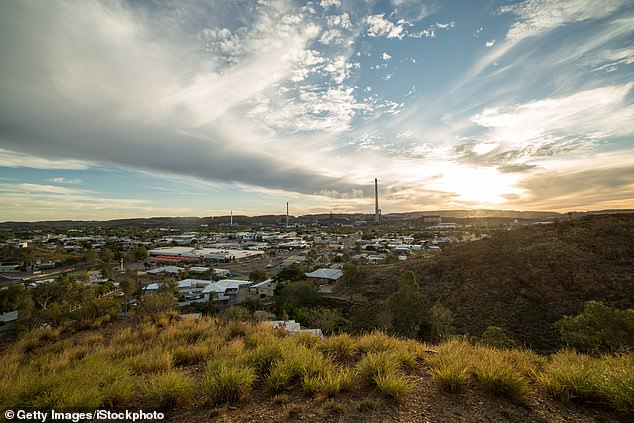 Mr Katter urged Ms Palaszczuk to ‘show leadership and step in’ to resolve the issues he raised in Parliament last week.

“Violent and destructive youth crime is tearing communities across North Queensland apart, and they are crying out for help,” he said.

“Mount Isa now has several businesses closed and TripAdvisor is recommending people not to stay for safety reasons.

“Given the inaction of the ministers concerned, will the Prime Minister show leadership and intervene to ensure that alternative tools, such as the relocation penalty, are provided?”

In her response to Mr Katter, Ms Palaszczuk acknowledged that youth crime was a serious problem in many Queensland communities, including Mount Isa.

“These are very complex questions. Unfortunately, some young children involved in juvenile delinquency do not have safe and secure homes,” she said.

“We must continue to develop our foster care system and we must recognize that it must also be culturally appropriate.” 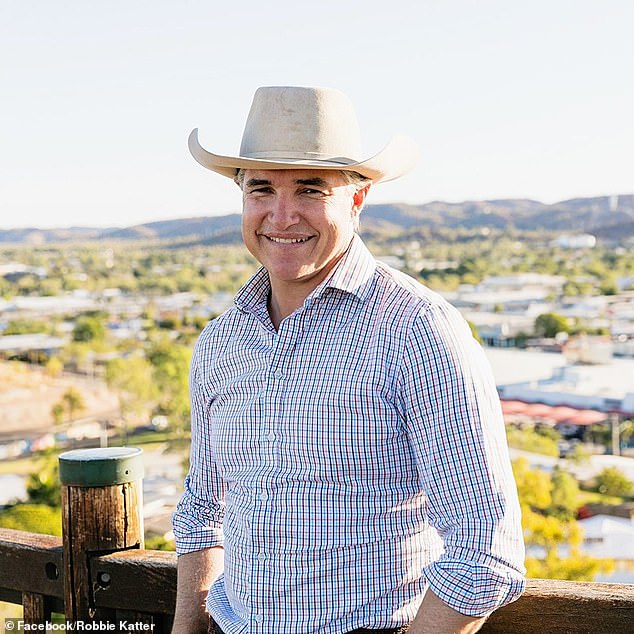 He called on the state government to provide security grants of $1,500 to those affected in crime-ridden communities.

“This crime wave does not discriminate, people have packed up and left cities, and beleaguered businesses have already closed or are about to close shop as a result of crime, and that is a shame glaring in any case,” Mr. Katter said.

“While the government is clearly unwilling to change the laws to help, we need to find a small way to financially help people who want to be proactive and help keep these offenders away.”

Starring Shilpa Shetty Kundra, Abhimanyu Dassani and Shirley Setia, Sabbir Khan’s film Nikamma hit the big screen on Friday. The action comedy is the Hindi remake of the 2017 Telugu film Middle Class Abbayi. Nikamma is set in Lucknow and is about the carefree world of Adi, played by Abhimanyu Dasani, who has spent his […]

PHOENIX – Four voting and democracy advocacy groups in Arizona are asking federal officials to ban Cyber ​​Ninjas, the company hired to conduct the partisan review of the 2020 election results in Maricopa County, and its CEO from doing business with the federal government. Citing work that did not meet election auditing standards, a refusal […]

Days after Trump’s home was raided on August 8, a man who posted regularly on his social media site attempted to break into the FBI’s field office in Cincinnati, Ohio, armed with an AR-style rifle. 15 and a nail gun. He fled the scene before being killed in a standoff. The episode was referenced in […]