Video testimonial startup Reel.Reviews is helping some of the nation’s fastest growing e-commerce startups increase their site traffic and conversions after just three months of operations.

Founded by Ainslie Williams and Steve Ford, who co-founded consumer insights startup QualieReel.Reviews is also preparing to close its first major funding round, having already secured investments from a number of high-profile backers, including Catapult Executive Chairman Adir Shiffman.

Reel.Reviews integrates with Shopify and allows businesses to find video testimonials and reviews from their users to use in marketing materials.

Businesses are given a unique link to give customers to register their reviews, which can then be accessed through a dashboard. Videos can be edited as desired by the brand or displayed via a website widget and will, over time, be analyzed by the software to determine their effectiveness.

A beta version of the product was launched last spring, with four customers signing up to help test this initial product. A free version of Reel.Reviews has been on the market since July, and the startup has about 50 businesses signed up, some of which pay for additional features.

One of those early clients was Tim Doyle’s Eucalyptus Group, itself a fast-growing health and wellness startup.

Williams tells SmartCompany that since Eucalyptus started using Reel.Reviews, their site traffic has increased dramatically and their cost per acquisition (CPA) with videos is 33% lower than other Facebook ads.

Similarly, Group Together saw a 46% drop in CPA and doubled site clicks, while Tyroola saw a doubling in cart size and a 12% increase in website conversions thanks to the Reel widget. .Reviews. Another user, e-commerce retailer Glow Dreaming, achieved a 5.3 return on ad spend on a Facebook campaign. 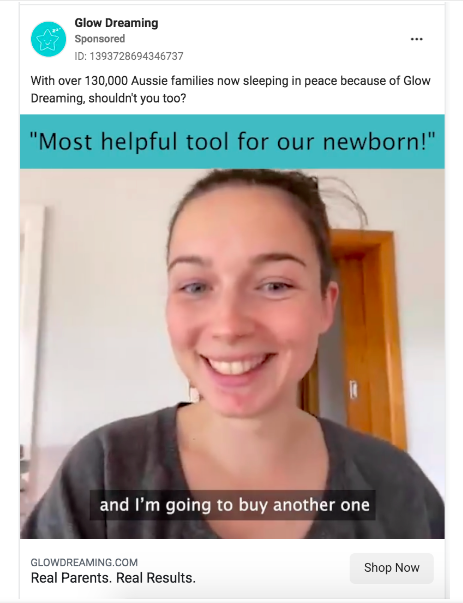 Born in a pandemic

The pandemic e-commerce boom has undoubtedly helped Reel.Reviews unlock early traction, but Williams says it also led her to opportunity in the first place.

Reel.Reviews grew out of Williams’ other startup, Qualie, which was working with government and big business when COVID-19 hit and, in her words, “everyone freaked out and froze budgets.”

This gave the team “some thinking time” and led to the realization that they were already well versed in capturing what people think of brands and products in Qualie’s videos. This same process could easily be applied to an industry that was booming during the pandemic: e-commerce.

“It was a very small shift in direction to reclaim the product for the tech stack to actually collect, rather than customer information, customer testimonials,” she explains.

“In [consumer] research, while we seek consensus from all the reviews we collect, in the world of e-commerce, we look for the most credible and authentic content, because that’s what drives the most conversions.

At the same time, Williams says video — already “one of the most powerful languages ​​of our modern age” — is growing in importance in e-commerce marketing as some of the biggest tech companies, like Amazon and Google, are facing questions about fake text reviews. .

And consumer research also shows that younger shoppers, especially millennials, are leading a “global push away from content that’s perfect.”

Those same consumers want “to be able to see themselves in the creation or the things that brands offer,” says Williams, who thinks the “tide is turning” on opaque influencer marketing.

“Because I’ve worked with real people for over 20 years in research, I have a very strong philosophy, both in business and from a research perspective…the power of listening to a real person talk about his experiences, you can’t go beyond that,” she said.

While much of Reel.Review’s development builds on what Williams and Ford learned from Qualie, a recent addition to the team has unlocked further growth.

Former Google employee Gilad Cohen joined Reel.Reviews in April, bringing considerable experience in digital marketing, and Williams says he helped the small team “get their feet on the ground and release a version free to try to get as many people to sign”.

Launching this way allowed them to “accelerate this testing and learning phase” as well as begin to better adapt to the product market”.

The startup is “in the thick of it” raising capital, and Williams hopes to raise $3 million from a combination of existing investors she worked with on Qualie, as well as a venture capital fund and investors. potential institutional investors.

If successful, the money will be used to bolster the startup’s workforce, with Williams noting that the startup needs “staff at scale.” The startup currently has three full-time employees, although some are still working on Qualie.

As the team grows, Williams is aware that there will be an “educational element” to show brands the value of capturing video testimonials and therefore getting them to sign up.

But she is convinced that there is a significant “end market” of consumers to reach, having discovered a large number of people seeking video reviews of brands online through the startup’s own research.

“And we know video is stickier because a lot more interpersonal communication happens through body language and tone, which you can’t achieve through text as easily.”

“There’s this huge voracious appetite from customers who want this content because it will help them make better purchasing decisions.”

OTTAWA — The Conservative Party website briefly crashed due to an increase in demand from new members trying to ensure they get a ballot to vote in the leadership race. The party is moving quickly to validate the hundreds of thousands of new membership applications to put an electoral list in the hands of the […]

Related practices and jurisdictions The day a plaintiff receives notice from the U.S. Equal Employment Opportunity Commission (EEOC) of their right to sue, the ninety-day period to file a lawsuit begins, not the date the plaintiff (or the plaintiff’s attorney) opens the link to the letter of right to sue, according to the U.S. District […]

The Texas Department of Health and Human Services appears to have removed resources for LGBTQ youth from its suicide prevention webpage. February 1, the webpage included a caption for The Trevor Project, describing it as “the leading national organization providing crisis intervention and suicide prevention services to lesbian, gay, bisexual, transgender, queer and questioning people.” […]