HHere’s what happens when you arrive at Another Place on an early summer evening in the Lake District. You park the car, ignore the hotel and walk straight through its meadow to the edge of Ullswater.

Registration can wait. What matters most in those first dizzying moments is stepping out into the slanting sunbeams and gazing across the water towards Arthur’s Pike Whale Ridge and Loadpot Hill. After a long drive, the sudden absence of noise is deafening. Its soothing effect is also instantaneous. It’s as if Mother Nature has reached out and given you a giant, welcoming hug.

So perhaps we shouldn’t be surprised that Another Place — a sister property to the always-trendy Watergate Bay Hotel in Cornwall – also succumbed to the magnetic attraction of water. This month it moves away from its original 19th century site, towards the lake, unveiling a redeveloped garden and a range of outdoor entertainment and accommodation. A few weeks ago, my wife, Vera, our two sons, Sam, 14, and Ben, 7, and I got a taste of what’s on offer.

The impressive grounds of Another Place

The changes are obvious. No more boring and incongruous parterre in the lower garden. It has been replaced by six shepherds’ huts and a giant lawn, lined with swings, an outdoor table tennis table and a large and luxurious treehouse suite.

Gone is also the recycled shipping container in which the hotel stored its water sports equipment. In its place is a purpose-built wetsuit center with changing rooms and underfloor heating.

In the meantime, just above its lake meadow, the hotel is opening a gracious greenhouse-pizzeria with Victorian flavors (June 27). Between meals, it will host yoga and Pilates classes. But its hour of glory will come each evening when the sun is out and customers can stroll there, order a wood-fired pizza and take it out to eat by the water. No ceremony, no cutlery, no fuss: just sticky fingers, gooey cheese and that mesmerizing view.

“Essentially we wanted to make two changes,” said Will Ashworth, the general manager, when he showed me around. “The first was to modernize the facilities and really make the whole property sing. The second was to better connect the hotel and our guests to the gardens and the wider landscape. The name of the project: “Outside”. 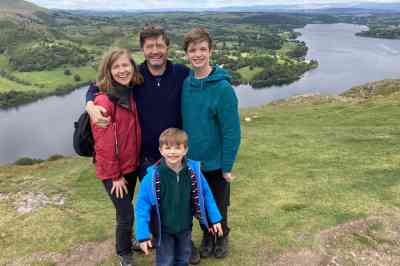 Sean Newsom and his family hiking

No kidding. For three days, we Newsoms barely ventured into the main buildings except to eat and splash around in the indoor pool. Instead, we huddled together in one of the shepherd’s huts. Each is actually made up of two huts, built from sustainable supplies of French oak and connected at the hip by glass walls – “so we can better let the outside in,” Ashworth explained. Decor is on par with what one would expect of such a humble abode, provided its occupant is a member of the Patterdale branch of Soho House and his entire herd is wrapped in pashminas. High quality linen, wood burning stove, oak flooring, central heating, it’s all there, plus a large double bed for us and bunk beds for the boys. Officially, the bunk beds are for those under 12, but Sam (almost six feet tall) slept very well in his. In the cabins reserved for couples, the place of the bedroom with bunk beds is occupied by a freestanding copper bathtub. 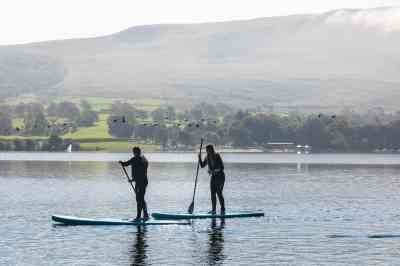 Outside, a fireplace was already installed with logs and kindling. We lit it and watched the logs crackle and pop before bedtime. Amid the elongated shadows of an endless northern twilight, we also made good use of the cabin’s soft woolen blankets. This is Cumbria, after all.

The catering, by the way, was excellent. Since taking over as head chef last year, Shaun Dixon has worked wonders at gourmet restaurant Rampsbeck, and his £55 three-course dinner menus are truly gourmet. Tender rump of English lamb with a burnt aubergine mash, roast chicken with truffle jus: both opened up flavors so rich, deep and unexpected that for ten minutes Vera and I stopped caring whether Ben was eating or not his supper. It’s a family record. In one of the new shepherd’s huts

Most of the time, however, we just put on neoprene and went out on the lake. Since opening in 2017, the hotel has had a wetsuit mindset, inherited from the Watergate Bay mothership. Only, instead of surfing, it offers canoeing, kayaking, paddle and wild swimming. And the watersports center (aka Sheep Shed) has everything you need to try them out, whatever the weather, including gloves, buoyancy aids and wetsuit booties. One-hour lessons and guided tours start at £30 per person, including equipment. First we paddleboarded, followed – a day later – by a blissful hour in a raft canoe, consisting of two canoes tied together with strong wooden poles. Our guide Amy had us paddle maniacally around a sheltered bay in pursuit of rubber ducks she launched from her own boat. From start to finish we were oblivious to the gentle but steady rain.

Later, when everyone was in bed, I joined an adults-only wild swim group led by Colin Hill, a cross-Channel swimmer and the first Briton to walk a mile of ice – that is in water at less than 5°C. It was one of the weirdest, most invigorating things I’ve ever done, and I came back to the shack wondering why it’s taken so long for the wetsuit revolution to hit the hotel scene of Cumbria.

I was already late to the party when I first entered Cornwall in 1993 and started surfing. But here in 2022, Another Place’s wholehearted embrace of the wet lifestyle still seems unusual. Which is crazy. As any West Country fan will tell you, wetsuits will stand up to the elements on your vacation. In a county that is home to one of the wettest villages in the UK (Seathwaite to Borrowdale) this is an invaluable asset. 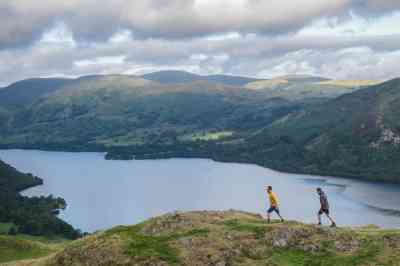 The hotel is on the shores of Ullswater

Of course, the national park is not limited to lakes. As a reminder, our shepherd’s hut contained all seven volumes of Wainwright’s hand drawn work Illustrated Guides to the Lakeland Fells. So on our last day we drove across Ullswater to climb the little Hallin Fell. It’s a family rite of passage for us Newsoms. I first rode it when I was six, and the short, steep 20-minute climb is the perfect length for young legs and lungs.

Our two boys have been there before and I wondered if they would be bored. But their eyes shone as we reached the top and looked out over the long shimmering trail of Ullswater – from the gentle, rounded hills around Pooley Bridge to the steep, sheer cliffs of Helvellyn.

It made me think that one day they would also take their children to the Lake District. If they do, I hope they remember our three days at Another Place and make sure everyone wears wetsuits.

Sean Newsom was a guest at Another Place, which offers B&B doubles from £210. B&B shepherd’s huts for four from £475 (another.place)

Hotel Review: Has the InterContinental Dublin come of age?

It’s just over 20 years old, but the lavish InterContinental has been through so much that it feels like a grand dame of Dublin hotels. Launched as the Four Seasons in 2001, the sprawling hotel was an instant, no-irony temple to Celtic Tiger Ireland. Set deep within D4, the OTT boom-era construction nodded to the […]

CONWAY – The review of the three-story 98-room, 59,412-square-foot Viewpoint North Conway hotel proposed for Intervale was continued by the Conway Planning Board last Thursday until the next board meeting on September 23. Board Chairman Ben Colbath said the meeting will be held again at the Conway Recreation Department’s Marshall Gymnasium at Kennett Middle School […]