Allsopp & Chapple pulled off a hit this summer, bringing in as new executive chef James Hale, formerly of Acadia and Capital Bar & Grill, back from his time at the Grumpy Rabbit in Lonoke.

With a few months to put its stamp on the menu, Hale has put A&C back at the forefront of the area’s upscale restaurants.

The website describes the style as “eclectic new American cuisine”, further explaining on the dinner menu page that “we seek to blend the traditional with the new and take and incorporate culinary ideas from around the world. in our unique cuisine.We support our local products and will incorporate them wherever possible into our menus.

The 8-ounce center-cut tenderloin at Allsopp & Chapple comes with mashed potatoes and green beans. (Arkansas Democrat-Gazette/Eric E. Harrison)
The portions are large and the plate presentation, one of the most notable aspects of Hale’s tenure at the late Acadia (1999-2015 at Little Rock’s Hillcrest), is superb.

Allsopp & Chapple is one of seven restaurants – five active, one vacant, one pending – on the 300 block of downtown Little Rock’s Main Street, offering varying levels of cuisine. At one end, the Tamalcalli, which is not yet open, will be a taco and tamale stand; Brewski’s is a sports bar; Samantha’s is a bar and grill. AW Lin’s is Asian fusion; The venerable Bruno’s Little Italy offers a traditional Neapolitan pizza and pasta menu.

A&C is the best of the bunch, with entree prices ranging from $19 for the scallop and lobster risotto lasagna to $65 (lobster tail, seared scallops, Pontchartrain sauce, sugar snap pea and bacon risotto). The atmosphere is pleasant, with perhaps a hint of rathskeller (although it’s not in a basement, it’s cozy and dimly lit, and with its wine racks out front near the ceiling) , with a classic rock soundtrack played at a reasonable volume. 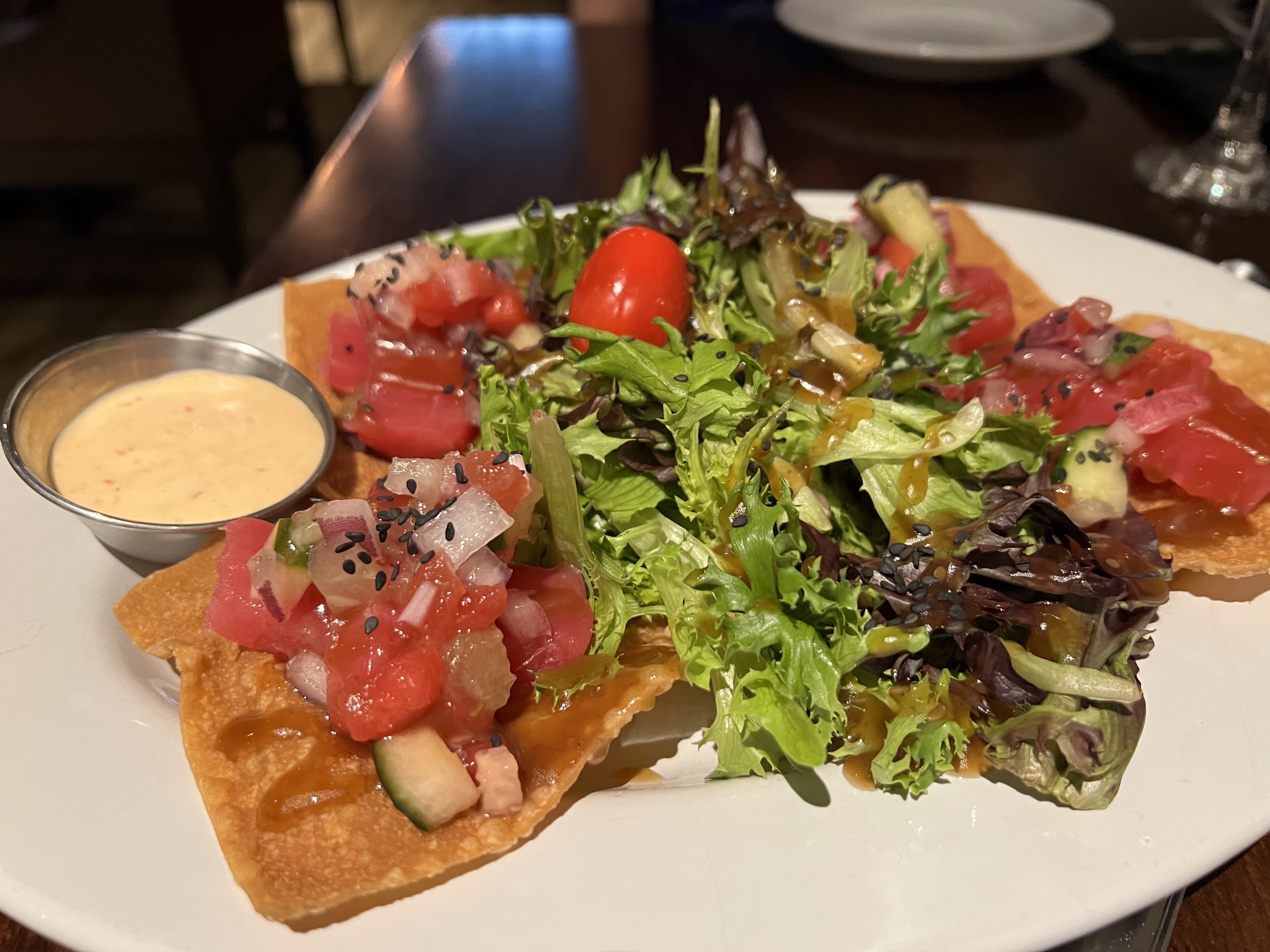 Tuna Melon Nachos is one of the “sharing plates” at Allsopp & Chapple. (Arkansas Democrat-Gazette/Eric E. Harrison)
Entreewise, we have stuck, successfully if not intentionally, to featured items as “house signature items”. Our blackened redfish ($38) was a good-sized, flaky, flavorful fillet topped with the tangy Pontchartrain sauce and a single “colossal” shrimp, surrounded by fried okra pieces, on a bed of “decorative” ( it’s the word menu, not ours) basmati rice that had its own Tabasco-like character (perhaps the spiciest element of the Pontchartrain sauce, but distinct on the plate).

Intrepid Companion’s Filet ($49), an espresso-cured 8-ounce center cut, seemed perfect at first, maybe just a little on the rare side of medium-rare, as she ordered, but it was almost tender with a fork and the light layer of cabernet demi-glaze complemented it nicely.

However, when she got to the middle of the steak, it was rather rarer than she could bear, to the point where she reluctantly felt compelled to send the remaining piece back to the kitchen. (Etiquette tip: You may think it’s rude to send a steak back, but if the steak isn’t done the way you ordered, it’s not.) -Generous portion of half -glaze, but it was easier to manage. We had no problems with either side – the mashed potatoes (a fancy way of saying ‘mashed potatoes’) and the green beans (a less fancy way of saying ‘ green beans”). 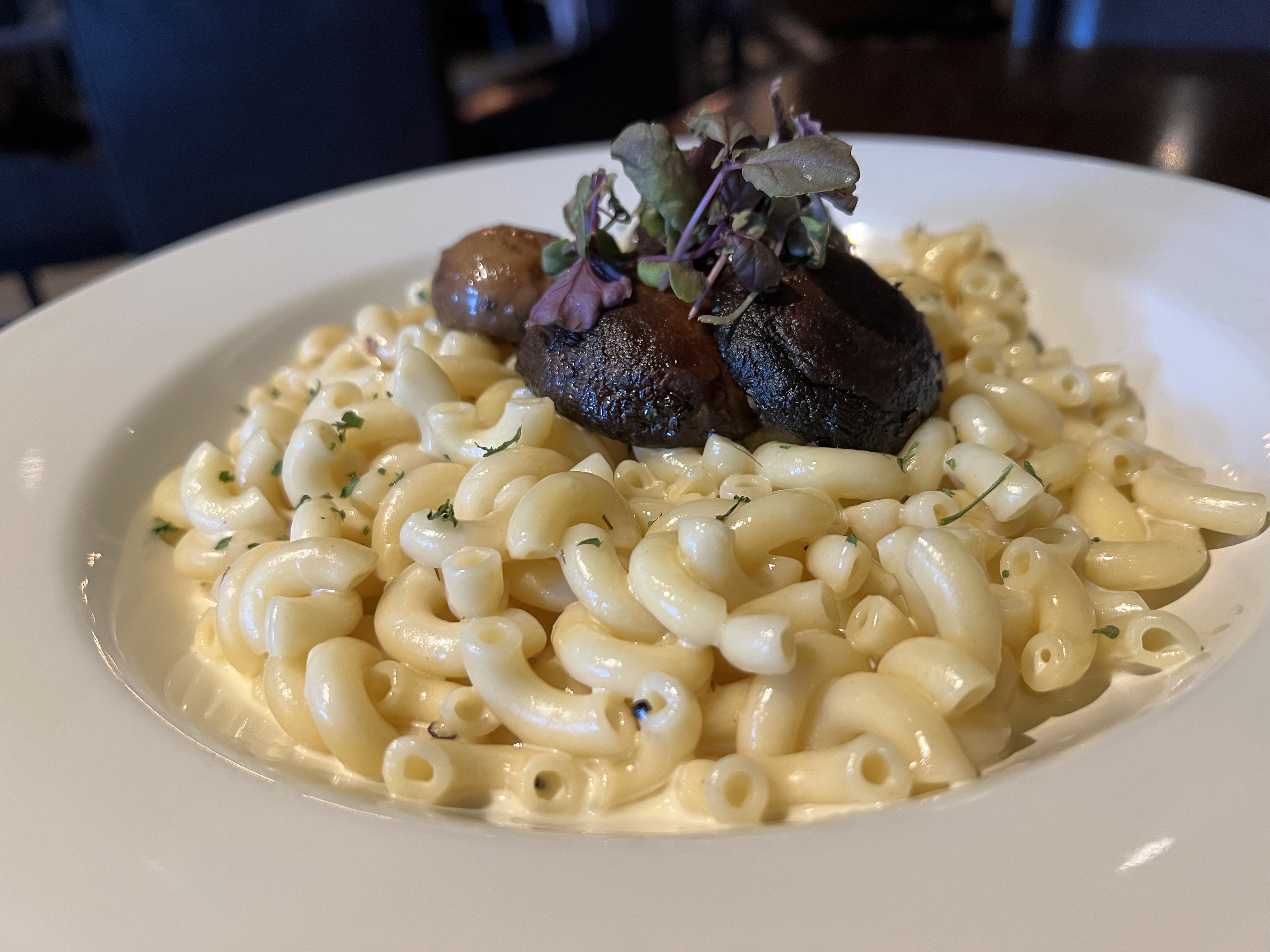 Four crimini mushrooms are arranged atop Allsopp & Chapple’s Gouda Mac. (Arkansas Democrat-Gazette/Eric E. Harrison)
With our second visit server’s recommendation to bolster our choice, we went with the Gouda Mac ($24), elbow macaroni in a smoked Gouda cream sauce kissed with white truffle oil. We had a little surprise when the dish arrived: the ‘baby crimini mushrooms’ we had been expecting chunks throughout the dish turned out to be four lightly salted sautéed mushrooms arranged around the top of the plate. The macaroni was just on the sweet side of al dente, and we simultaneously ran out of room and joy in the Gouda sauce, after which we took the rest home and enjoyed it as cold leftovers.

The menu lists several complimentary entree options, including three scallops ($22); three colossal shrimp, $12; a 7-ounce lobster tail ($39) and two “lamb lollipops,” $18. (We probed the possibility of just ordering the lamb, but our server dismissed the idea as going against the new chef’s game plan; however, it seems odd that the lamb chops are available as an extra and not as input.)

To open, we can recommend the Melon and Tuna Nachos ($17), among the “sharing plates”, large enough to serve as an appetizer for two. It consisted of generous helpings of thick-cut, sushi-grade ginger-marinated tuna, topped with a fresh melon salsa on a crispy tostada-style wonton, with a small salad in the middle of the plate and, on the side was a cup of horseradish and red pepper aioli that complemented, but didn’t necessarily add anything, to the tuna experience. 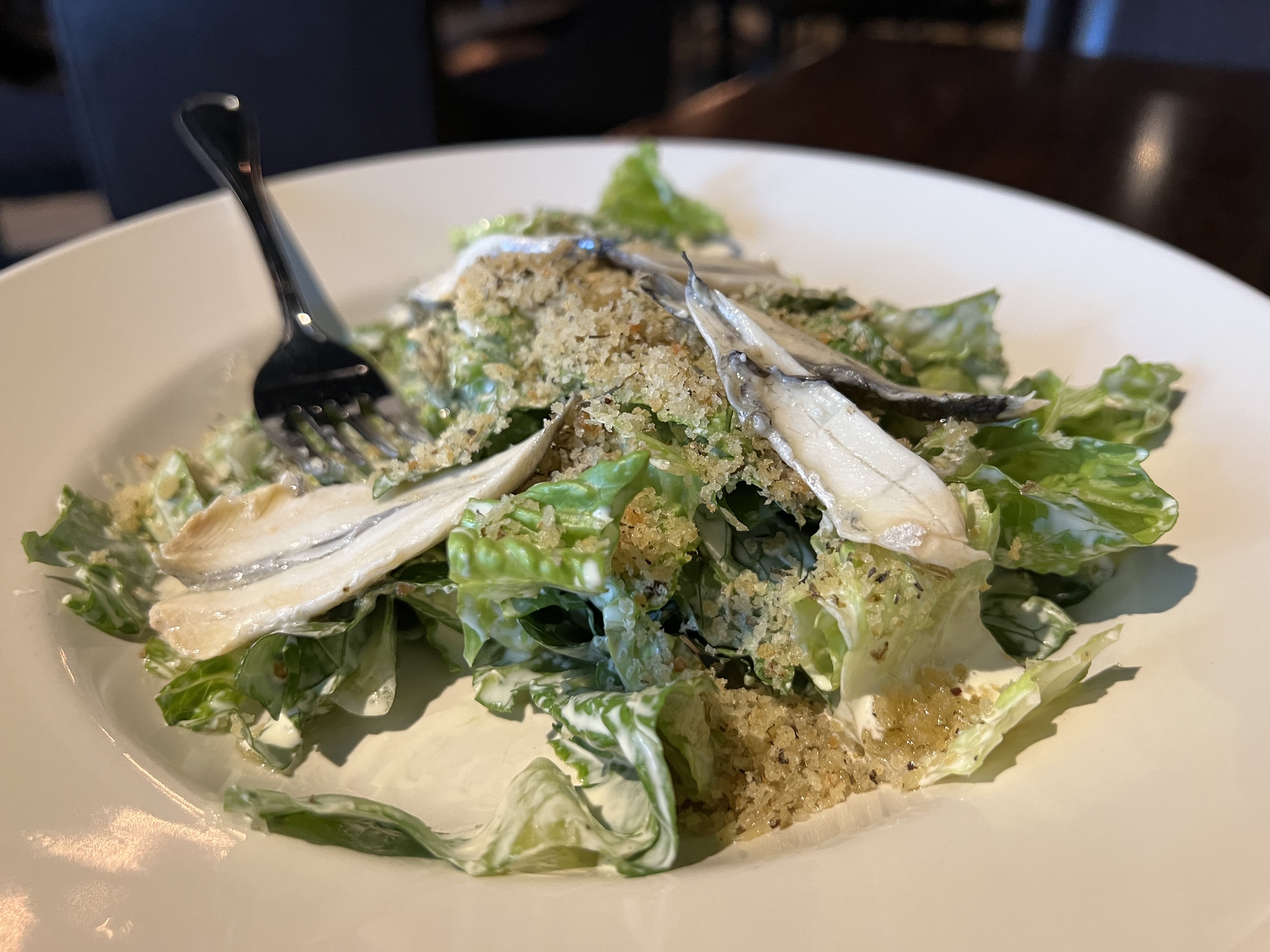 Adding marinated white anchovies to the romaine salad accentuates its connection to a traditional Caesar salad. (Arkansas Democrat-Gazette/Eric E. Harrison)
On our second visit, we again followed the server’s suggestion and opened with the Caesar’s Little Romaine Salad ($10), a heart of shredded romaine lettuce topped with a lemon parmesan vinaigrette and, replacing the croutons , a roasted garlic panko crumble. We nicely added sliced ​​marinated white anchovies for an extra $4 to accentuate the Caesar connection. (Caesar dressing contains or is supposed to contain anchovies, while A&C’s Lemon Parmesan dressing does not.)

Service was good to excellent on both visits; our servers and hostess were helpful and very friendly. Parking can be an issue – with so many restaurants on one block, finding a space on the street within a block or two on foot should also be considered a knock, although there is parking on the ground and on the nearby bridge. Restaurants have banded together to rent a service to provide complimentary valet parking; one of the valets in light blue shirts also acted as a doorman when we entered and left.

[ad_1] Lyrics by Jessica Cooper SUMMER! SUMMER! SUMMER! is on the menu, next to the Plaza Athénée in Paris. Away from the hustle and bustle (and the unforgiving Parisian summer heatwaves), the legendary Plaza Athénée offers a shady, leafy oasis in its iconic courtyard restaurant at the heart of its hotel at La Cour Jardin. […]

[ad_1] Chicken starter with red curryPhoto by Kevin Kramer There is something intoxicating about wrestlers: the squirt hockey player training for the NHL, the startup entrepreneur evolving into the Fortune 500, the suburban restaurateur dreaming of the big city. Khaluna is the fulfillment of that dream for Ann Ahmed. Born in Laos and living in […]